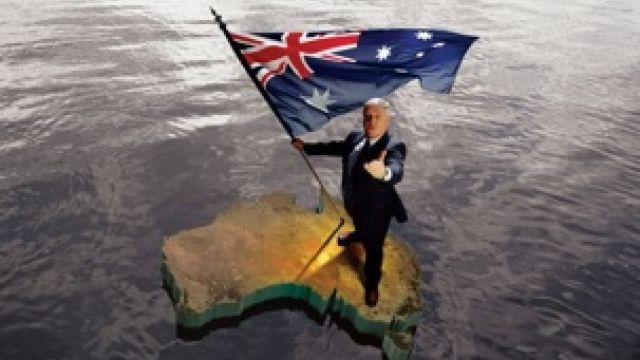 A veteran of stage and screen and long time political satirist, Max Gillies takes us on a witty, sharp and sometimes refreshingly un-PC, jam-packed show - Godzone.
This revue is set in a ‘revivalist tent’ where we are the congregation. Fluorescent colours, jagged lights and a big screen makes us feel like we could just as well be the studio audience of a game show. A lectern centre stage is where Gillies lives out a raft of political figures and social commentators including the tipsy, cravat-wearing, floppy-fringe-donning author/journalist and opinion maker Christopher Hitchens. Gillies takes on Kevin Rudd, Julia Gillard, Tony Abbott and a hysterical portrayal of columnist and associate editor of the Melbourne-based Herald Sun, Andrew Bolt who pokes fun at the foibles of the latte-drinking urbane set.
Between his wig and makeup changes we witness an array of characters on the big screen where he plays Gordon Brown with a 5 0’clock shadow, big man Joe Hockey, a lost and confused Malcolm Turnbull, Noel Pearson and Barnaby Joyce, portrayed as a dodgy second-hand-car salesman type. Gillies doesn’t come out from behind the lectern, which reminds us that we are all in a sermon or even perhaps a summit of sorts, possibly similar to the 2020.
In the second half of the show a buxom Julia Gillard shares with us her vision for the ‘bedderment’ of our future school students with ‘opportunidies’ offered by the roll out of the broadband ‘nedwork’. Gillies then comes out as Tony Abbott with over sized-ears, the occasional stutter and a fairly constant tut. The energy seems to drop a bit, the script seems to lack the punch and clever lines it served prior. Let’s say the Liberal leader seemed somewhat labored. For the most part, this show is superbly written with hysterical one liners delivered seemingly unrehearsed and off-the-cuff. Having a stab at the Labor party’s do-gooder, nation building ways and Rudd’s Christian values really encompasses what Godzone is all about. The good ol’ Aussie way of having a laugh at ourselves is what this revue really brings home.
After years of taking off political figures in his successful television and live shows, you can see why Gillies has received a string of awards including being awarded an OAM in 1990. It is evident Gillies still ‘has it’ and is still an Aussie legend!
Emma Bell