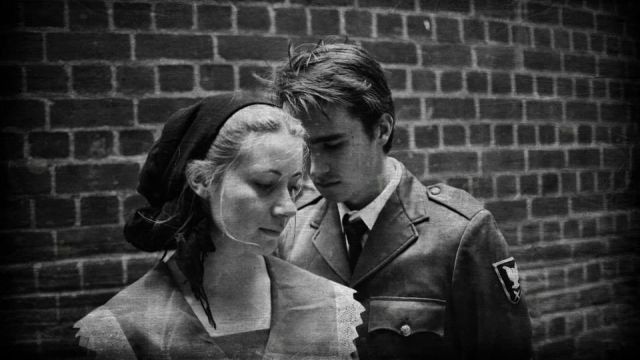 A Good German.  The bad play.  Yes, sadly, this production from Bitten By Production is bad in almost every way.  The writing manages to be naïve, gauche and cliché all at once.  The story lacks any credibility.  The direction, by Justin Anderson and Ashley Tardy, delivers a static mise en scène and stilted performances.

Of the cast, only Bevan Uren has authenticity and Christopher Farrell competence and credibility, despite being saddled with some ludicrous dialogue – and, like all the cast, cod ‘Cherr-man’ accents.  Even the ill-fitting uniforms and too-clean dresses are bad.  I wondered ‘what were they thinking?’ – but perhaps they weren’t.  You almost have to admire the insouciance – or sheer effrontery – in putting this tosh before the paying public.

The action takes place in a Nazi prison camp in 1945.  That’s according to the press release and the program.  In the real world, by early 1945, Soviet troops were closing in from the east and those in the camps knew it.   Most Germans knew the war was lost.  She surrendered unconditionally on 7th May 1945.

The play displays no acknowledgement of these conditions or, indeed, scarcely any other historical reality.  Perhaps it’s difficult with a cast of five, but the prison camp bears no resemblance to any known Nazi camp.  Is it a work camp?  An extermination camp?  A holding or transit camp?  We never know.  (You’d think someone might have seen Schindler’s List.) From what we do see and hear, this camp is, well, like a low security prison on starvation rations.  Dialogue between the Nazis about ‘what we must do’ – that is, to the Jews – never descends to specifics.

One prisoner character sweeps the yard.  He’s the uncle of the two Jewish girls who are always slipping away from whatever unspecified work the Nazis have them doing in order to exchange exposition with their uncle.  The only scene of any dramatic interest is where the Jewish prisoner Jacob, a front line soldier in WWI, taunts the camp commandant, an artillery man, for knowing nothing of courage.  This scene, however, has little to do with the rest and appears to have no consequence; it merely says Jacob has a death wish (leaving his nieces unprotected) and the commandant is indeed a ruthless – if cowardly - monster.

Perhaps Gabriel Bergmoser (who also plays Furst, the lead character) figured he already knew all he needed to know about Nazi concentration camps or death camps, or that his bogus ‘grey areas of morality’ (I’m quoting the program again) were so powerful, so elemental that context and setting didn’t matter.  Given the subject matter, either decision displays irresponsibility.

Possibly the show works for those who see past all the other flaws and know very little or nothing about these things, but as is often the case, the reality is so much more powerful than what a jejune imagination can dream up.

Gemma Osmond, as the conflicted hero’s Jewish lover, Sara, is inexperienced, but she can’t go on confusing sincerity with inaudibility.  Megan Guy as her ailing sister, Sasha, has little to do but be ailing and therefore provide the plot device that causes Sara to prostitute herself to Nazi Furst in exchange for drugs.  The camp also has a doctor, Dietrich, played by Hamish Buchanan, but whether he is the doctor for the prison guards or for the Jewish prisoners or both is never clear.  Presumably he provides the drugs.  Whatever the case, it seems Jewish prisoners are able to escape their compound and visit him at night.  Mr Bergmoser prefers to concentrate on the doctor’s weakness and corruption rather than any credible context.

What really is surprising is that A Good German is Mr Bergmoser’s sixth play since 2010 and, again according to the program, his work has met with praise and success.  Is what is going on here then a mysterious anomaly – or simply amateurism run rampant?