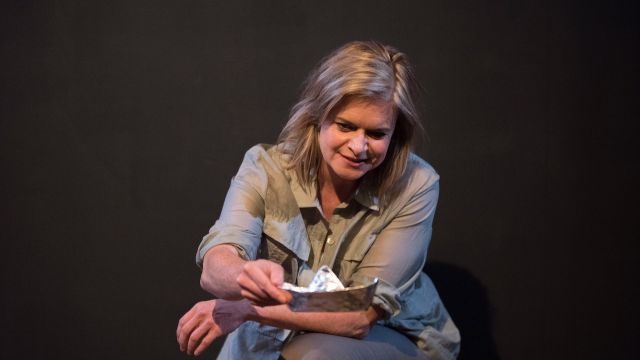 Kate Gaul has an amazing ability to see the possibilities of a space – and a script. Give her some exquisite words from an exceptional writer (Noelle Janaczewska), an actor (Jane Phegan) who understands them and connects with their cadences and phrasing, a composer (Nate Edmondson) who is receptive to their rhythms and emotion – and together they can transform the space … and transport you. Together they can make you believe you are travelling on a boat down a wide river, or walking down the streets of a town north of London “where you can’t see the woods for the acres of carparks”, or fathoming the way to the intensive care ward through a maze of hospital corridors.

Together they have shaped this gentle, sometimes funny, sometimes sad, sometimes even a little confronting piece of writing into a performance that reaches beyond the stage to places endured, places visited, places evaded … but more importantly, places imagined. Not only are these creative people “good with maps”, they are good with space and words and music. Janaczewska provides the “words” in a beautifully written performance essay that delves into her memories of poring over her father’s maps. Of finding the page where the Amazon river wove its way from the Andes to the sea and dreaming of the day she would sail along it. Of losing herself in “ripping yarns and travelogues”. And explaining how they all led to the “desire to be elsewhere”.

Jane Phelan uses these words to be “Noelle”. She finds the rhythms of the phrasing in movements that are deftly directed, carefully spaced and paced. In her face and with clever changes in tone and pitch, she takes us into Noelle’s life, justifying the need to get away, in her imagination, from “the streets that sprawl along the Lee Valley”. Later, we see the desperation as she describes her father succumbing to Parkinson’s disease: “is it parental disintegration that turns us into adults?” and the impatience with her mother who upbraids her for “being rude to doctors” when she tries to get more professional help. All this occurs on an open stage, where the only decoration is a river of tiny silver boats that curve toward the audience, a single chair; and three piles of books – maps, directories and Virginia Woolf.

Janaczewska’s writing is elegant. Kate Gaul’s direction is uncluttered, sophisticated. Edmondson’s soundtrack is understated, expressive. And Jane Phelan brings them together in a very touching and memorable performance.