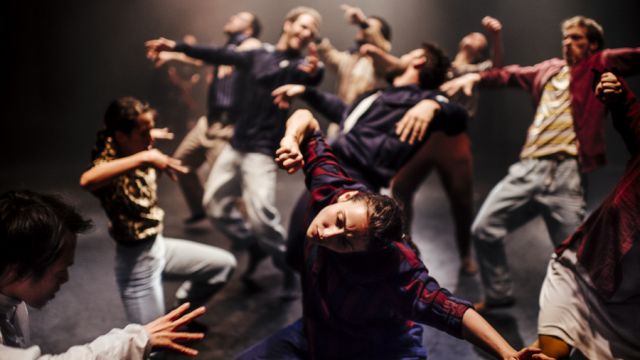 Grand Finale is indeed just that, a grand finish to the 2019 Adelaide Festival. Performed by the Hofesh Shecter Company from England and Israel, with an ensemble of ten dancers from eight different countries, this is a high energy performance with links to an international vocabulary of dance.

This performance for me is an exploration of the delicate line between frenzy and complete madness; it’s as if order is hanging on by its fingertips and any slip, fall or misstep will result in total chaos. There is the exuberance of the attitude of, ‘Why not go mad? The world is ending,’ but the nature of being human is to continue on, even when it seems hopeless and useless, because our default response in the face of danger is to live, survive, push through, carry on carrying on.

There is beauty and a black humour mixed into the violent emotions of the piece, but seeing the funny side of the worst things is one of the ways humans deal with impending tragedy and disaster.

The ensemble of dancers is immensely strong, focussed and totally in the moment. The skill of the dancers shows itself particularly in the waltz with ‘dead bodies’. The complete lifelessness of the ‘dead’ and the strength of the living is a testament to their skills as dancers. The dancing is so raw and intense that sitting in the audience with the music pounding through me, I could almost reach out and touch the emotion coming from the stage. The statement on the company’s website is absolutely true: “We dance to know what it feels like not just to live, but to be alive.” More than one person on their way out of the theatre echoed the thought swirling in my head, “What I would give to be able to dance/express myself with that intensity?” One of the ways in which the push to continue living shows itself is in the music. Five musicians, dressed as if they’ve just got off the Titanic, move seamlessly and almost magically around the set providing a live soundtrack  which is at times set against Shecter’s own recorded electronic ‘thrash and howl’ score. The music provides moments of peace, contemplation and most of all hope. The musicians continue to play as they did on the Titanic, even as the ship was going down or, as in this piece, we head insistently towards a precipice from which there is no recovery.

The lighting is an essential component of this production, because Tom Visser’s design allows the dancers to appear and disappear, to emerge from dense darkness or to be shrouded in grey mists. Also emerging, gliding and creating an infinite arrangement of spaces, entrances and exits are the huge black/grey tombstones.

This is an exciting, thought provoking and ultimately highly successful production. Grab tickets if you can still buy them.