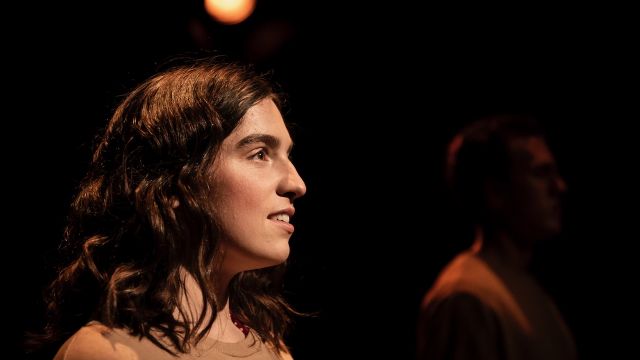 If you are a die-hard fan of rom-com movies or grow misty-eyed at love story or ‘romance’ movies in general, this pacey, funny show at La Mama may bewilder, annoy or set teeth on edge.  Alternatively, this melange of verbatim extracts from mainstream love story scripts, narrated and performed so as to point up their contradictions, absurdities and sexism just might lead you to see some favourite movies in a new light.  Skilfully assembled to create meaningful juxtapositions, and segueing smoothly from one scene to the next, Grand Gesture undermines, if not demolishes, that warm and fuzzy glow that comes from a happy ending.

Quite likely many (most?) people will recognise the scripts quoted (all are the basis of box office hits – see the list below) – and that is fun in itself – but then many people will also react with dismay – or embarrassment - and protest, ‘But I love that movie!’ In fact, that is exactly what a sign held up by a cast member proclaims. 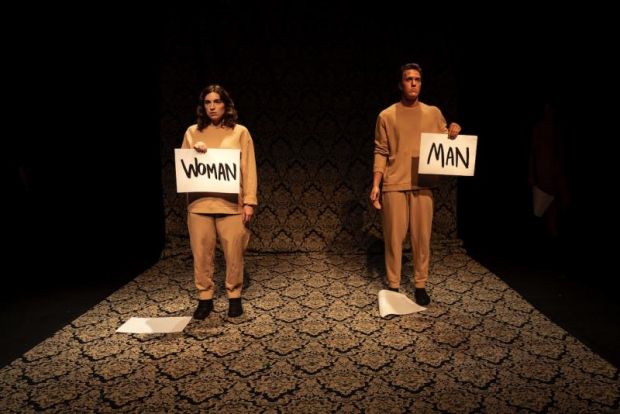 Put together by a cohort of VCA Theatre Making students, the show takes irony and scorn to new heights.  In one disturbing sequence, cast members sit on a couch, supposedly watching these fantasy movies while furiously if catatonically masturbating.  Frequent use is made of signs displayed by the cast – e.g., WOMAN and MAN, suggesting that the characters are interchangeable stereotypes.  We even get that notorious and creepy scene from Love, Actually where Andrew Lincoln stands in the snow and shows a series of cards to Kiera Knightly – but here done in such way that the sentimental pathos is unmissable.  Genders are switched – immediately revealing tired conventions.  Thinly disguised clichés  abound, but you may not have noticed how cliché they are till performed like this.  Scene after scene reveals that the WOMAN rarely has any agency – and often needs to be rescued, if only from herself - that the MAN is wiser and stronger and possibly more noble, and that the WOMAN succumbs – against her better judgement - or at best succumbs to being told what to do.  (E.g., the final scene of Casablanca.) Of course, all these extracts are taken out of context, so you could object that this satire is ‘unfair’ (as most good satire is), but the repetition of love story tropes over and over does make a point.  So, does high emotion bring forth cliché?  It looks that way.

Here’s the list supplied by the production of the sources of their verbatim quotes: La La Land, The Adjustment Bureau, Titanic, Twilight, West Side Story, Dirty Dancing, Bridget Jones’ Diary, Fifty Shades of Grey (the book), Sex & the City, Casablanca, The Notebook, 10 Things I Hate About You, When Harry Met Sally, Pretty Woman.  Not included, but quoted: Love, Actually.  Movie buffs and cinephiles will note that there are no Howard Hawks movies in this list, or anything written by Ruth Gordon and Garson Kanin, suggesting a distinct decline in the genre. Grand Gesture is satire, but it’s not, thankfully, mere smartie-pants stuff; it is satire in the name of lived reality, of destroying misery-making false expectations and the illusion that once Miss or Mr Right is found – or even exists - all is solved.  Romance may not be dead, but don’t expect it to be the be-all and end-all because it won’t be and isn’t.  But let’s not forget that these movies, which explicitly promote the ancient premise amor vincit omnia – or at least ‘and then they lived happily ever after – are popular, are treasured (significantly more by women too) and if there’s something Grand Gesture doesn’t do it’s acknowledge or investigate that.  But I suppose that if it did it wouldn’t be so funny.

P.S. Grand Gesture has lost five performances due to the lockdown.  Let’s hope that it – and Jofus & the Whale – can resume soon.