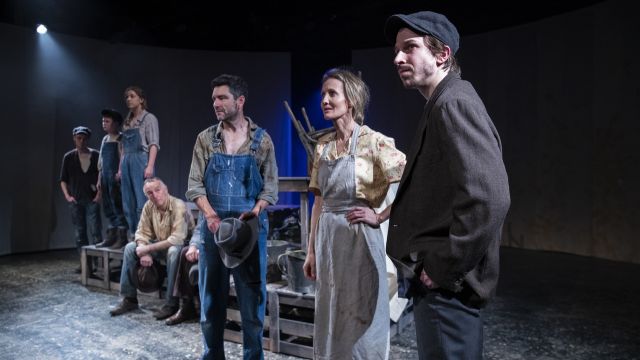 The New Theatre’s production of the stage adaptation by Frank Galati of John Steinbeck’s epic novel The Grapes of Wrath is an engrossing and impressive show. A strong principal cast is well supported by a large, talented and versatile ensemble. From the start of the play, which opens with a projection of the song “We’re in the Money”, the tensions, troubles and frustrations of the characters slowly grow in the first act as we come to understand their bitter struggles. The second act climaxes with some highly dramatic scenes, the flood being particularly well staged, to the final sharing of life’s basic food with a stranger.

The story centres around the Joads, one of the thousands of poor tenant farming families driven from their home in Oklahoma during the Great Depression by drought, changes in farming methods, poverty and bank foreclosures. Like so many others they set off for the California in the hope of work and a better life.

For me the outstanding actors were Rowena McNicol and Matthew Abotomey. McNicol played the ever stoic and hopeful Ma Joad, around whom the family revolves. Her philosophy and determination to go on keeps the family together through every trial as she believes each of us is a “little piece of a great big soul”.  Balancing her fierce yet steadfast character is Matthew Abotomey, playing Tom Joad, her volatile, excitable son recently released from prison for killing a man in self-defence. These two bring energy and resolve to a journey which begins with such hope. 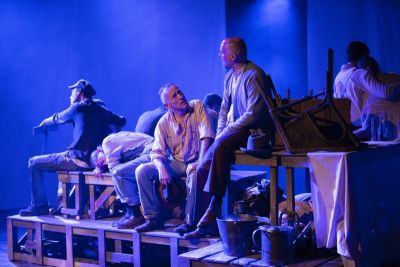 Joining the family is a former preacher Jim Casy, played gently by William Baltyn, whose conscience forced his change of lifestyle. He is still called upon to play the role of preacher but does so without the fire and brimstone and in the end offers his own life for another.  Andy Simpson plays Pa Joad, a man almost overwhelmed by the circumstances and believing in the false tales of a wonderful life in California.

The other members of the family build the picture of relationships and show how circumstances can destroy or strengthen.  Uncle John, played by James Bean, allows guilt from a past deed to consume him. Rose of Sharon Joad, played by Madeline MacRae, is the pregnant daughter whose moment of understanding and maturity comes at the end of the play. Her husband Connie Rivers, played by Matthew Raven, is an immature youth who deserts the family. Noah Judd, played by Simon Emmerson, believes he can never fit in. Al Joad, played by Ryan Madden, leaves to find “girls” and his own way of life and Grandpa Joad, is played by Peter Irving Smith, full of life yet dying early. Two younger siblings, Lily Stirling as Ruthie and Loki Texilake as Winnifred and Granma Joad (ill on the night of this review) complete the family.

Surrounding these central characters is a wonderful ensemble who bring life and action to the piece setting the different scenes as the family journeys across the land. They act, they sing, they dance and play multiple roles. 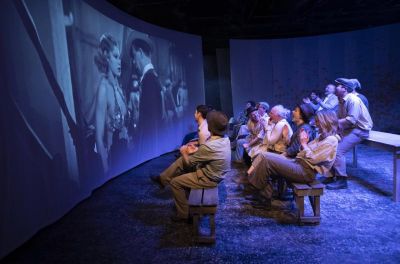 Director Louise Fisher most successfully draws together all the characters so we the audience are carried along on their journey – this is a huge task as it is vast story over time and place. Tom Bannerman’s set is simple but very effective as there is a clever use and redesign of the pieces throughout the play. Sound, David Cashman, and lighting, Michael Schell, heighten the atmosphere and well-timed projections on the side curtain (vision design Christine Hatzis) help us understand the true picture of another time and place.