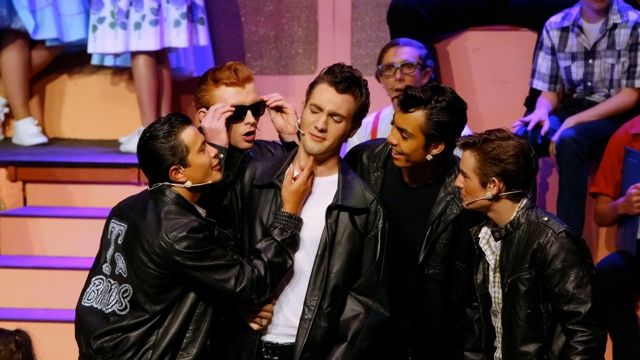 Just three years old, Redcliffe Musical Theatre boasts a Board of eight, every member a specialist in charge of a production department. They are one of the new musical companies springing up over S.E. Queensland (and, I suspect, other urban areas) and shaking up longer-established companies.

What a cornucopia of talent Director, Madeleine Johns and Sam Klinger (her assistant) attracted and drilled into excellence, with support from Chorus Master, David O’Keeffe, Band Master, Lachy Stewart and Choreographer, Meredith Johns! Maureen Bowra (Sandy) and Brendon Beltrame (Danny) led a vast cast of triple-threat stars. Their Summer Nights and You’re the One that I Want still ring in my head.

So often supporting leads are the wilder ones with social faults. So it was with Rizzo and Kenicke, played expertly by Courtney Underhill and Thomas Armstrong-Robley respectively. We took them to our hearts. Underhill’s stage persona sparkles three times larger than her physique. She broke my heart with There are Worse Things I Could Do. Armstrong-Robley led the ‘cool dudes’ [Danny and Kenicke, along with Michael Owen (Doody), Jimmy Morris (Roger) and Dean Taylor (Sonny)] in the signature song Greased Lightning.

The pink ladies deserve kudos, as does William Motunuu for his Teen Angel moment of glory; and also the singing, dancing ensembles, both junior and senior.

I look forward to next year’s Phantom of the Opera.