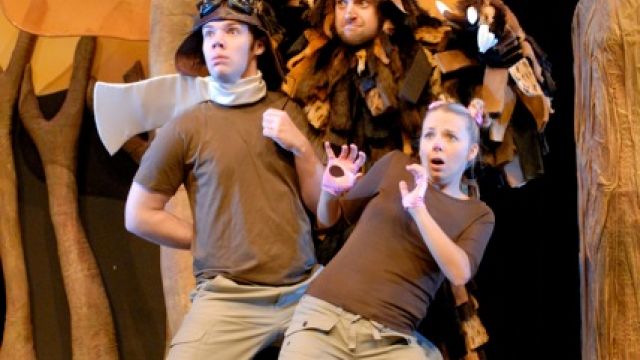 The blaze of publicity that preceded this enchanting little show obviously inspired parents to dash out and buy the book for Christmas.
Practically all the kids knew the rhyming couplet that recurs throughout the course of the action, and revelled in the opportunity to join in with Mouse each time she used the Gruffalo line to frighten off the three predators. In fact even the big kids and the grey set joined in with gusto. The Gruffalo is that sort of interactive theatre.
The utter simplicity and effectiveness of the costumes were amazing. The three actors each wore pale green pants with a brown tee-shirt and sneakers. The minimal additions they employed to establish their characters was a splendid example for kids: you don’t need elaborate dress-ups for Make Believe.
Crystal Hegedis plays Mouse throughout, a cute combination of courage, cunning and vulnerability.
Stephen Anderson creates for us amusing caricatures of a fox, an owl and a snake, while Tamlyn Henderson doubles as the narrator and the Gruffalo − when finally we get to meet it. (At that stage Anderson assists with the narration.)
The magical musical is a faithful adaptation of the award-winning book by Julia Donaldson and Alex Scheffler. Olivia Jacobs and Toby Mitchell created the original which played the West End in 1999. Jacobs directed this Christine Dunstan Production for the Australian tour.
Beg, borrow or steal tickets. Your kids will love you for it.
Jay McKee