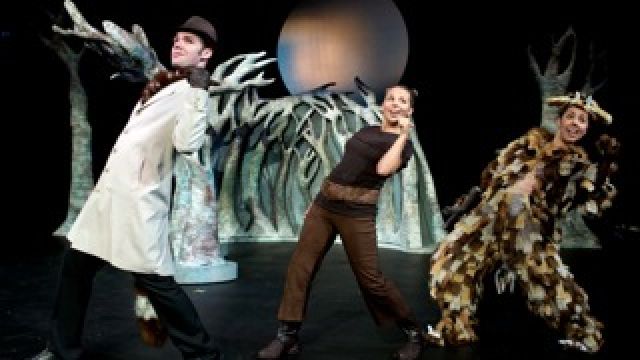 This adaptation of Julia Donaldson and Axel Scheffler’s sequel to The Gruffalo brings the original characters back to the stage with the addition of the curious, daring and very engaging, Gruffalo’s child. Played by Chandel Brandmarti, this brave little offspring of the Gruffalo is vibrant and bouncy, wide-eyed  and expressive, capturing the young audience and keeping it entranced, from the moment she slips off her sleeping father’s knee to find The Big Bad Mouse until she races back into his embrace after her adventures.

A stationary figure in this production, the Gruffalo is confined to his rock in the cave, but commands the vast space of the York Theatre through Stephen Anderson’s animated facial expressions, as he steps up into the character, admonishing his daughter against the dangerous characters of the deep, dark wood and entertaining the adults in the audience with his ‘mousey’ gourmet puns – Tira-mouse-u and Mouse-aka among them! 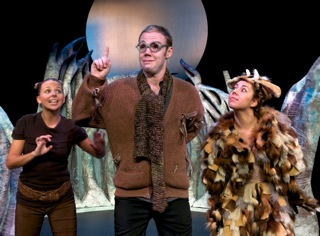 The Mouse, played with reticent aplomb on 9th April by the understudy, Andrew Threlfall, is cute and brown and playfully unassuming – while moving from Mouse, to narrator to prop manipulator. His light movement and expressive face and gestures epitomised the continuing cunning of this smallest of the creatures in the story.

The set – the cave and the ‘forest’ – are imposing but stylistic enough not to be scary – as exemplified by the about-three–year-old who was allowed to wander through it before the show began. The ‘trees’ are moved noiselessly and effortlessly to take the mouse on her journey and the cave provides a useful ‘dressing room’ for the predators’ costume changes.

The script itself cleverly follows the story, including many of the rhyming stanzas which the children (and their parents) know so well – and are encouraged to complete. The songs which have been added are bright and simple, as is the choreography. And, as in all good children’s theatre, there is plenty of audience involvement to keep the kids active and engaged – especially in a couple of the songs which might be just a tad too long for the younger kids. For most of the production the sound was good, but the first ten minutes – where the characters were introduced and the story of the Gruffalo revised, was drowned by the ‘settling down noise’ of some of the audience and some crying children. In a space as large as the York theatre, this needs to be taken into consideration. 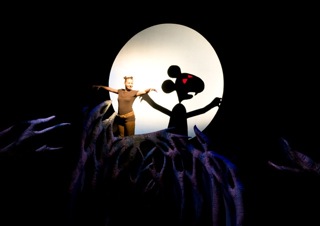 A great innovation by the collaborators was the ‘up-grading’ of the Stick Man of Scheffler’s illustrations to an intricate part of the production. The little stick figure is held tightly in the hand of the Gruffalo’s Child in every illustration in the book, but is never actually mentioned in the story. Here, however, his role as ‘security blanket’ is brought to life, especially in the Child’s theme song, “Stick by Me’, and shows much sensitivity to the messages in the original illustrations.

All three actors embrace their roles, especially Anderson, who, as well as playing the Gruffalo, plays all the predators – the Snake (slinky, silver tails); the Owl (Brown jacket and feathery glasses); and the Fox (sleazy salesman in trench coat, trilby and a foxy tail) – and joins in the songs and dances. His energy and versatility seem boundless!

In fact, energy, timing and a sense that all three actors are really enjoying themselves make this a really engaging production and does true justice to the much loved characters that Donaldson and Scheffler created.

La Boite surged into 2011 on another family-audience magnet.

Based on the picture book of the same name by Julia Donaldson and Axel Scheffler, this show is bound to be as popular as its 2010 forerunner, The Gruffalo. 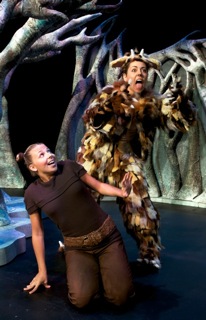 Simple storyline, minimum cast and set, audience accessible and full of movement, songs and well-drawn characters, it romps along for about an hour ─ ideal time span for the target audience.

Both Stephen Anderson and Crystal Hegedis recreate their loveable characters of Gruffalo and Mouse, respectively, and Chandel Brandimarti gives us a Gruffalo’s child that every kid in the audience can identify with.

Anderson in particular works with the frenetic energy of a six-year-old on red cordial, playing Owl, Snake and Fox as well as the Gruffalo. He sings well, moves nimbly and works himself into a lather of sweat coping with his many costume changes as well as the onstage movement.

Special kudos to the lyrics writers and composer for their accessible folk-style songs that youngsters can sing or clap to, and to all of the other creatives whose vision landed accurately in ‘early childhood’.

A ten-year-old in the family I accompanied gave it a spontaneous totally cool rating. Judging by their enthusiastic involvement in the show, I reckon everyone in our audience from preschoolers to grandparents would agree.

Crystal Hegedis as Mouse with the Moon

Stephen Anderson as Fox, Crystal Hegedis as Mouse and Chandel Brandimarti as The Gruffalo's Child