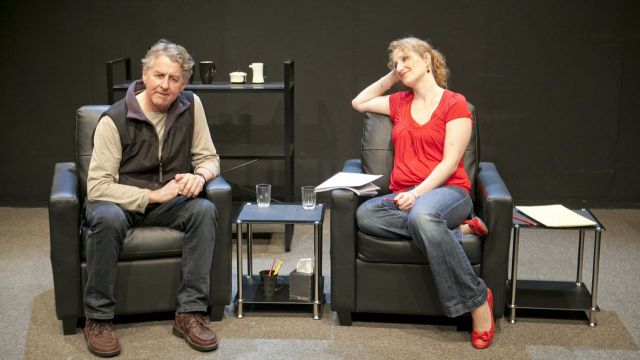 We all remember the horror of seeing the planes slam into NYC’s Twin Towers on Sept 11th 2001, but we can’t even imagine the trauma of being on the streets of that city when it happened.

Just 12 days later, with the whole city still shell-shocked, a grieving Fire Station Captain contacted a writer for help writing the Eulogies for the eight men on his team who had died in the tragedy. Still traumatised and disbelieving, he couldn’t find any words to say that would comfort the families of those who were gone forever, amongst them his best friend. That meeting, and the eulogies that were the result, form the basis for this play based on a true story. Two terrific actors and a highly skilled director bring that process to life. It is painful, wistful, funny and full of anger and grief and poignancy. Damian Jones is Nick, a career fire chief, a good man who feels he has somehow failed his men by being alive. Jones gives a stunning portrayal of a man confused by a loss he cannot comprehend. He’s an actor of emotional depth and warmth and moves us to tears with the anecdotes of the men he will never see again. Kathy Lepan-Walker is marvellous as Joan, a journalist who needs to help Nick through his grief in order to deal with her own. The two are guarded at first, unwilling to show too much, appear too vulnerable. Yet gradually a friendship is formed, a true connection is made between the two. It’s a simple play that doesn’t rely on plot, yet has at its heart one of the most powerful events of this century. The two actors are superbly directed by Grant, who slowly lets the characters unravel their emotional cloaks and reveal their vulnerability, in order to live again. There are even laughs and chuckles in the most unlikely of situations, and a wonderful fantasy Tango that is quite breath-taking when Nick offers to teach Joan to dance. The production is beautifully balanced, thanks to the talent of the two players and Grant’s sensibilities. The setting, a black box living room of modern minimalism with black leather and chrome chairs, is perfect and both set and sound design are by the director. A jug of coffee actually holds coffee, and the two drink it. The air of naturalism, in such a surreal situation, only serves to strengthen the impact. On either side of the performance space, on black screens, are photographs of firemen lost in 9/11, plus photos of towers themselves. The screens are used as a backdrop for some monologues and one can’t help looking at the photos and wondering if any of these men is the subject of Nick’s Eulogy. As an unplanned bonus, the Ferntree Gully fire siren started roaring incessantly about 15 minutes into the play, adding an unexpected sense of foreboding. In addition there is the exquisite guitar music by Jake Shimabukuro which provides the entr’acte. For almost 90 minutes these two actors explore the nature of grief and heroism, and yet there is nothing excessive or histrionic. They simply talk, they reminisce, they look for words to honour the fallen, to say goodbye, to give comfort, and never does the piece become theatrical, thanks to the exquisite choices made by Grant. It’s not an easy play emotionally, and it cannot have the same impact on us, the audience in Australia some 13 years later, as it must have had when it opened in New York just 12 weeks to the day after the Towers came down. Nevertheless, it’s a beautiful piece, far removed from the usual excellent but more middle-of –the-road offerings at 1812.

The play is showing at The Bakery – and it is definitely baked to perfection.