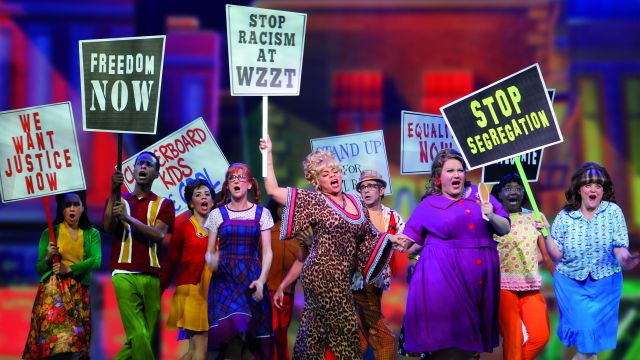 Before the show even began, the audience were met with a stage-width LED screen playing reels of popular TV shows from the era such as I Love Lucy, Rocky and Bullwinkle, The Lone Ranger, The Beverley Hillbillies, and more. Here we are folks, welcome to the 60s.

We first meet our heroine, Tracy Turnblad (Jaz Flowers), as she is flown in on a vertical bed during the opening bars of “Good Morning Baltimore.” Her entrance was met with excited applause from the audience but what happened next truly has to be seen to be believed.

The proscenium arch is trimmed with LED ropes that outline a giant television through which we view all on-stage action. The LED screen mentioned earlier flies backwards and splits into three sections as the stage legs light up and you suddenly realize you are looking at an entirely digital, fully animated ‘set.’

Honestly, I had my doubts after seeing some pre-production photos. On the web they made the set look terribly flat and uninteresting, with the cast standing out from the very shallow cyclorama. Not the case. Director David Atkins OAM and his team have created a visual and aural assault that unrelentingly floods the senses (in a good way) with colour, sound and energy from ‘whoa’ to… ‘WOAH!’

The LED screens have an animated depth of field I could not have imagined - and the colour! Characters interact with the screens (opening windows, writing on blackboards, etc.) and even jump ‘in’ and ‘out’ of them to the absolute delight of the audience.

You can instantly see Roadshow Live’s influence on this production. I know I keep going on about them, but the LED screens allow for filmic transitions simply not possible with conventional sets. With a strong cartoon influence, sets bounce into place, bop along with the music, and allow characters to enter dream sequences or unconsciously communicate their thoughts. This alone creates a layer of understanding I don’t think has ever been achieved anywhere else in the theatre before. But enough of the technology.

Hairspray has one of the largest lists of leading and featured roles going around and there is too much awesome in this production to write about it all. Every performer is purely amazing and Jason Coleman’s choreography is inspired and heart-pumpingly energetic. Costuming, down to Link Larkin’s (Jack Chambers) sequined socks, is exquisite and psychedelically colourful, and I tip my hat to musical director Stephen Amos and his orchestra. If we had not seen the live orchestra on screen during the bows I would have sworn black and blue we were listening to a professional studio recording.

Throughout the curtain calls I couldn’t help but grin stupidly at the genius of it all. This production reminds me of the talent thriving in our theatre industry that the world can’t avoid for much longer. Sure, Hollywood knows who we are, but what of the Great White Way? Not having seen the Broadway or West End productions I can’t be sure how realistic this idea is, but I have to wonder: Is this possibly the best version of Hairspray running anywhere in the world today? Don’t bother heading to New York, get yourself to the Princess Theatre to experience this musical milestone as soon as you can.

Check out our preview article as well. www.stagewhispers.com.au/news/hairspray-do-stars-matter-anymore