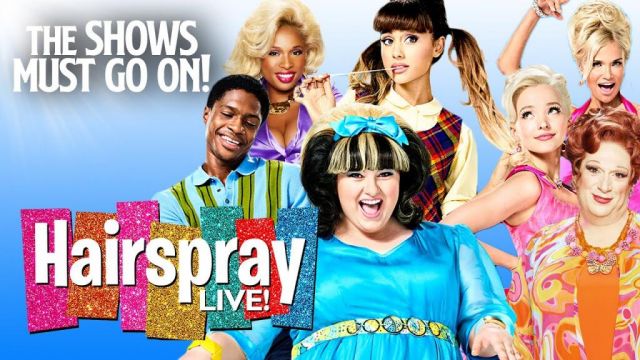 One of the best, if not the best, musical comedy of the past two decades, Hairspray Live! had a perfect cast and was the perfect vehicle to showcase them. The stars lived up to their hype, with Jennifer Hudson as Motormouth Maybelle and Ariana Grande as Penny Pingleton knocking it out of the ballpark with their vocals. Harvey Fierstein, repeating his iconic performance of Edna Turnblad from the original Broadway production, and with a list of cameos as long as your arm to add to the star power, this NBC production was totally euphoric.

Hudson’s “I Know Where I’ve Been” was a knockout, as was Kristen Chenoweth’s Velma in “Miss Baltimore Crabs”. Maddie Baillio in her first professional role, made a good fist of Tracy Turnblad, but alongside pros like Hudson and Chenoweth was a mere novice in the vocal department. Fierstein’s vocals as Edna had more gravel than a council worksite, but played it big, delivered the cracking one-liners with snap, and brought a lump to the throat with Martin Short as Wilbur in “Timeless To Me.”

Dove Cameron as the bitchy Amber was fun to watch, as was Zac Efron look-alike Garrett Clayton as Link, but the performance of the show was ex “World of Dance” judge Derek Hough as Corny Collins. A brilliant dancer with charisma to die for and quite the best performance of this role I’ve ever seen.

“The Nicest Kids In Town”, “Ladies Choice” and “(It’s) Hairspray” lifted the roof of the sound-stage with their energy and zest.

Andrea Martin was an OTT Prudy Pingleton, Rosie O’Donnell a butch Health Ed Teacher, whilst it was a nice touch to have the original Tracy from the 1988 movie, Ricki Lake, and Broadway’s original Tracy, Marissa Jaret Winoker make an appearance as Mr Pinky’s Girls.

The show also restored on of the musical’s best numbers, “Mama I’m a Big Girl Now”, which had been dropped form the movie.

The production had been (wisely) edited to that which was seen when it originally aired in 2016, so we never got to see compere Darren Criss’s live crosses to several U.S. cities (including Baltimore), but we did get to see Chenoweth finally taking her bow which had been lost in the original because the director cut too early. But that’s one of the joys of “Live” television. It’s never perfect!