Half A Person: My Life as Told by The Smiths 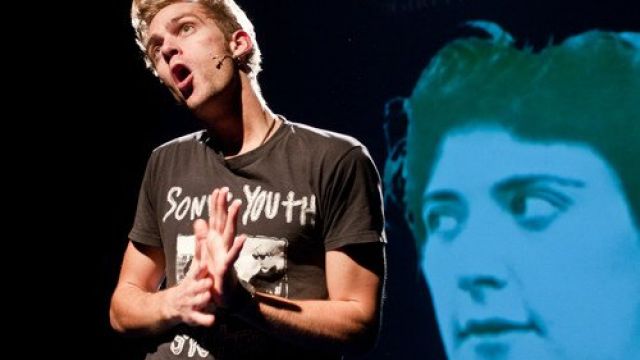 Half A Person, written by Alex Broun, is the 110-minute story of William’s life, performed solely by Mark Taylor. If the length of the show wasn’t amazing enough, Taylor also had to stop and sing The Smiths songs throughout the show.
It was a pleasure to watch the audience nodding along to the songs, sometimes mouthing the words, all the way through the performance. And it was very easy to do, as, through a combination of perfect mixing and a highly talented performer, it was often hard to tell whether Taylor was miming or if he could actually sing Morrissey that well. Taylor’s research paid off – he perfectly personified the androgynous Morrissey both physically and vocally.
Taylor switched between multiple characters and accents seamlessly, portraying upwards of five different characters of both genders. Broun’s quick-fire comedy perfectly matched Morrissey’s witty lyrics although the audience seemed to miss a lot of the humour.
Artwork from The Smiths albums, singles and EPs were projected as a background to the performance with a couple of film clips played near the end.
Half a Person is a love story – not only between William and his companions, but also between William and The Smiths. Like most relationships it’s not all rosy. William deconstructs and disagrees with Morrissey’s lyrics during the show, yet through some form of kismet they see each other through. Their music captured a generation and Half A Person is the story of one person’s life with The Smiths.
Ian Nisbet