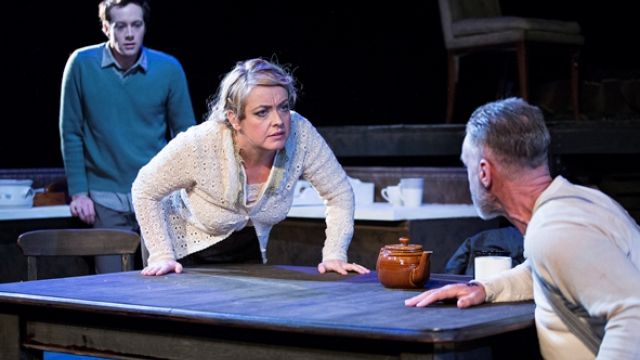 Written in 1948, and originally set in 1919, this play is loosely based on the story behind William Dobell's painting The Dead Landlordand White's own recollections of the seedy world of London boarding-houses.

Using clever juxtaposition White draws a vivid picture of characters struggling for reason and recognition against a background of poverty and squalor. A Young Man (Rob Baird), an aspiring poet, is a tenant in one of the upstairs rooms of a boarding house. A Girl (Danielle Baynes) inhabits another room. They do not meet, but communicate through a door. The landlady, the aptly named Mrs Lusty (Lucy Miller), and her husband (Zach McKay) inhabit the basement. When Mr Lusty dies, his family of loud-mouthed cousins accentuates the seediness of the poorer working class White sought to expose. 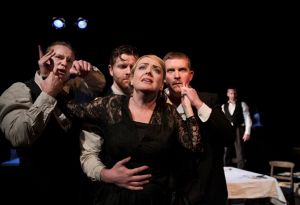 White’s use of language is integral. The lyrical word images of the Young Man and the Girl contrast with the bleating of the landlady, the snorting and shouting of her husband, the rough, suggestive language of his cousins and the squeaking and cackling of the street ladies as they search a dustbin.

In style it is part vaudeville, part lyric poem and part gothic drama and director Phillip Rouse has accented each aspect of this in very tight, imaginative direction and careful character development. He has chosen a skillful cast and obviously worked closely with them to achieve his vision. There is variety in pace and tempo. Timing is tight and Pintersque pauses are just long enough to work. The vaudeville interludes use simple but effective choreography, which the cast performs with energy and verve. 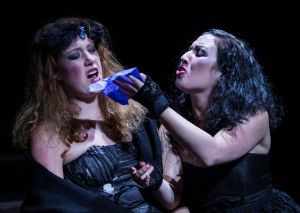 The two ‘storeys’ of the set are connected by a diagonal stairway, which allows for action across three levels and Rouse has made the most of this. With the use of carefully designed light pools, scenes move fluidly from basement to stairway to upper floor. This is especially effective in a segment of the second act where freezes and lighting take the action seamlessly back and forth between the basement and the upper floor. Such scenes are dependent upon split second lighting operation.

Whilst the theme of the play and some of its characters are depressing, this production finds some humour and light. Baird’s Young Man is personable. He moves fluidly on the stage and his use of vocal variation accentuates the lyricism of White’s language. Lucy Miller finds the strengths and flaws and humour of Mrs Lusty. She is alternatively aggressive, complaining, blaming, pleading. Her physical presence on the stage is demanding and commanding. 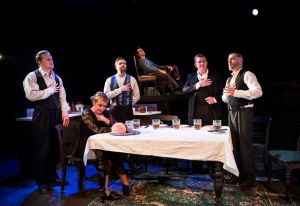 So too is that of Zack McKay. He plays two roles with experienced aplomb. As the Landlord he is lethargic, demanding, belligerent, accusing. As Relative One he is light on his feet, fast-talking, leading his slower-thinking cousins to sadistic action.

As the Girl, Danielle Baynes, all in white, and removed from the action on a swing, seems to depict contrast and reason, but she also is alone. The street ladies at least have each other as they scavenge through garbage tins; and the landlord’s relatives also have strength in numbers and relationship.

It is typical of White’s work for the characters to be clear, fully developed and easily identified while the theme might be depressing or obscure. Phillip Rouse has overcome this in a tightly directed production that finds the humour in the situation and the characters without taking away from the futility of their plight.