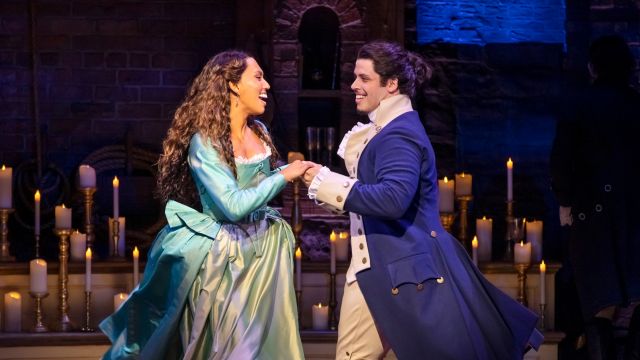 When Disney Plus released the broadcast of the original cast of Hamilton, one school of thought was that many people would be satisfied, and not pay to buy a ticket. But the sale of 250,000 tickets before the show opened in Sydney has demonstrated that on the contrary, the TV version has been terrific advertising. Seeing it live, you also come to appreciate how much better the experience is of seeing it in the flesh.

For a production that has never been seen live in this country, there is tremendous awareness of the songs and story, fuelled by years of consumption of the music. At the industry preview it felt almost like a Sound of Music sing-along, waiting for your favourite tune to come along.

No-one did sing-along out loud in the 100 percent capacity venue, maybe a few hums beneath our masks of “In the room where it happens”, or “I’ll be Back”, “My Shot”, or the ubiquitous “Alexander Hamilton”. I was lucky enough to see the musical live in New York – in the front row - when I got up at 4am in a near blizzard, to wait for 8 hours to get a standby ticket to see the original cast.  Still, seeing the musical again years later I was struck again by the freshness of the score. The combination of Broadway melodies, hip-hop and screechy drop the microphone rock is delicious.

The big question going in was – would the local cast match it with the best of the best, we’ve seen on the television? The answer is yes. In the big shoes of Alexander Hamilton was Jason Arrow.  Whilst he could never match the charisma of Lin-Manuel – who originated the role – word around the foyer was that he sang sweeter than Miranda and made a top-class fist of the acting.

Chloe Zuel as Eliza Hamilton sang sweetly and put her own stamp on the final song of musical. Lyndon Watts as Aaron Burr was a little subdued in the opening song but warmed to his role as Hamilton’s nemesis. Carving up the stage was Victory Ndukwe, as Marquis de Lafayette and Thomas Jefferson. He looked like a fearsome winger in the NRL but performed like a concert violinist.

In absolutely scintillating form was Brent Hill as King George. He milked every syllable to perfection. Hamilton is above all an ensemble show. The crisp chorus led front and centre by Daniel Assetta was impeccable. The choreography of this musical is very special and helps convey a general sense of what is going on – when the rapid fire of facts about politics can drown members of the audience less aware of the back story.

Indeed, this is the type of musical which you appreciate the more you know about American history and it is impossible to fully digest on the first viewing.

The technical aspects were brilliant. The lighting most amusing when King George declares he is blue with anger and is drenched with that colour.  The orchestra was crisp and I could hear every word from my seat in row M.

Even though the audience is told what happens to Hamilton in the opening song, the ending is no less powerful or poignant – thanks to the extraordinary staging of the final scene, which winds between slow motion and double time.

It is a cliché but in this case it is true. For musical theatre lovers Hamilton is a must see.