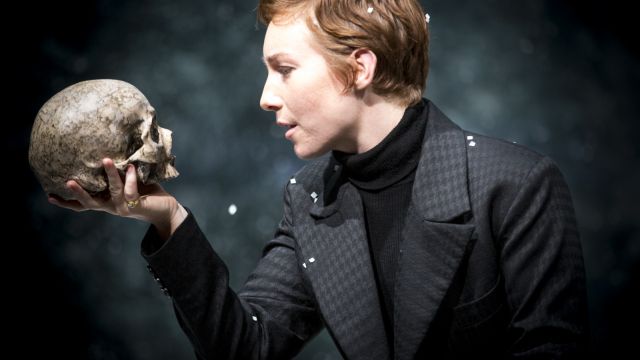 Bell Shakespeare betters a run of disappointing shows with this conventional, touchingly domesticated telling of Hamlet.

Screens of imposing snowclad forests surrounds the stage, interlaced in part with family videos of happier, nostalgic times for young Hamlet and his kin.

Snow too falls on the actors as they plough through shaggy white carpet and a house scaffolding with its furnished interior, Denmark circa 1960s.  Anna Tregloan’s homely design – and ubiquitous drinks trolley – sometimes clutters the stage, robbing the play of grandeur, but in all this is fine storytelling from director Peter Evans.

Harriet Gordon-Anderson presents a clear, unadorned Hamlet, in no ways mad or sensational but  bitten by grief and anger. It’s a boyish, certainly male Hamlet but her sex nicely engenders those well-rendered words with a female wisdom and irony. 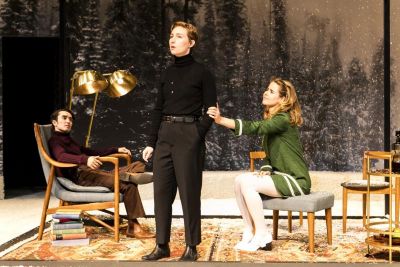 Lisa McCune is a compelling, smartly mini-skirted Gertrude, lusty with new love for the cardiganed Claudius, whose murderous underbelly is well etched by James Lugton.  Sophie Wilde brings a perky naivete to Ophelia, dressed up cute for Carnaby Street, while Robert Menzies is a comic Polonius, her ponderous, caring Dad.  The play is much edited but Hamlet’s old friends, the now deceitful, Rosencrantz and Guildenstern (Jeremi Campese and Jane Mahady) are more central.

Not all the cast matches Gordon-Anderson’s vocal clarity – which remains an ongoing challenge (and irony) for this company devoted to Shakespeare – but this Hamlet is well worth catching.