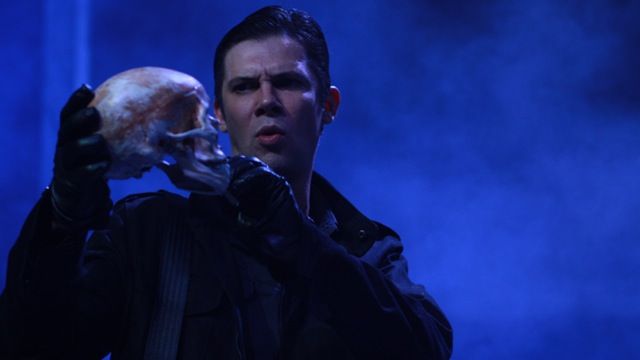 David Berthold, in his inaugural address as the new Artistic Director outlined his vision for the theatre from 2010: a dynamic, experimental use of the intimate in-the-round space to explore plays, sounds, words, music, movement − any new form of theatre that might engage young audiences.
(Of course the 2009 season had already been programmed by his predecessor.)
This Hamlet exemplifies those aspects of Berthold’s vision: direct, simple, energetic, passionate, loud, modern, and provocative. He even borrows horror movie motifs to build the dramatic intensity.
I fully expect the purists to disapprove. It challenges conventional precepts.
The predominantly younger crowd at the preview I attended were wildly exuberant in their praise. I also was impressed, and urge other oldsters to appreciate, how modern technology (mobile phones, e-mails, audio-visual technology) can enhance and embellish the Danish drama, even if anachronistically.
Berthold’s approach allies with Grotowski’s Poor Theatre concept: minimalist set, modern costumes and emphasis on the performances.
The mostly young cast with Toby Schmitz in the lead, Ross Lowe, Thomas Larkin, Christopher Sommers, Steve Toulmin and Gemma Yates-Round perform credibly if over-passionately at times. I feel confident they will find the balance between emotion and vocal clarity during the early performances.
Stalwarts Eugene Gilfedder (Claudius and the Ghost), Helen Howard (Gertrude) and Trevor Stuart (Polonius and Gravedigger) are anchors and exemplars for their younger co-cast. Yet even they, in anguished or prolix sections lost clarity of diction.
Persistent qualms: Would Polonius actually invade Queen Gertrude’s bathroom for a meeting? And would her son Hamlet do likewise later? Great opportunity for a gratuitous nude scene (and Helen Howard is a gorgeous Rubanesque nude!) but is it too late to rethink this scene? It would simplify set complications and move the action along.
That said, I fully expect this production to set an exciting standard for this year’s season.
Jay McKee