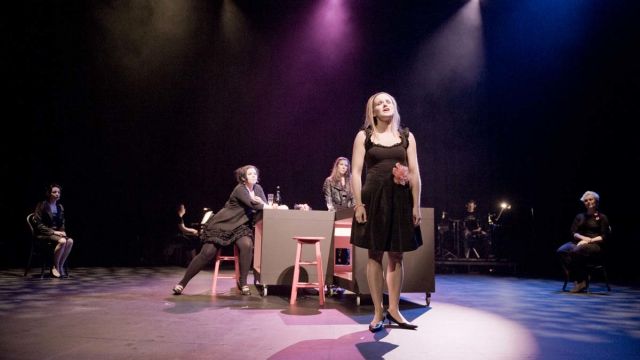 Whilst best described as a ‘song cycle’, Handle With Care is more than that. Composer Megan Shorey has crafted some very strong musical pieces, performed magnificently by an accomplished cast of eight female performers, with some truly stunning group harmonies.
A new work is always tough on an audience, and an audience is always tough on a new work – especially when that work is a new music theatre piece.
But Handle With Care: The beauty and bitch of being a woman, managed to strike several chords with the audience, and particularly (naturally enough), with the females.
The clichéd issues such as body image, women in the workplace, girlfriends socialising and motherhood, were all handled in a much more subtle way than the other current crop of estrogenic shows targeting women audiences.
The minimal dialogue between songs seemed to be unnecessarily drawn out in its delivery, which meant the show lacked some much needed pace to drive each scene along. This probably means the piece is searching for dramaturge to work closely with the composer, before we see its next incarnation on the stage.
Director Lewis Jones has put together a solid cast of professionals, with some notable performances from Penny Farrow, Arlie McCormack, Liz Buchanan and Rachel Dunham.
The minimalist use of set, costumes and lighting (no doubt budget driven) proved that fancy tricks aren’t necessary; and let us focus on the actual performances and the message of each character the piece captured.
With some artistic tweaking and a slightly longer rehearsal period, Handle With Care, could well prove to be a chamber music theatre piece with legs.
Paul Dellit