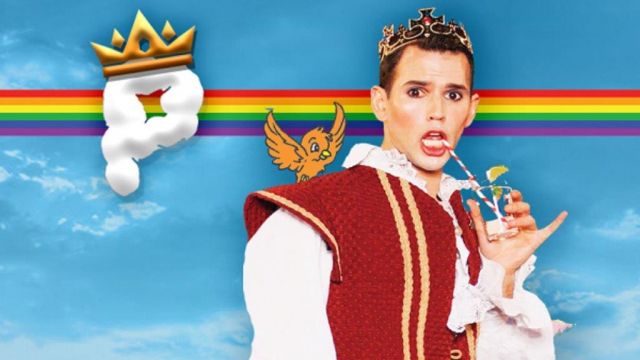 It is interesting that while Disney movies and animated features don’t really feature any explicitly queer characters, their subject matter tends to play to queer sensibilities.

A row has broken out on social media after reports that Jack Whitehall will play the first major openly gay character in a Disney film.  “He is playing a gay man – one who is hugely effete, very camp and very funny” (The Sun, UK).

Almost all of their films tell the stories of characters who don’t fit into the societies in which they live and this is precisely what Happily Ever Poofter is all about.

Performed in the intimate venue of The Bally at Gluttony, (reminiscent of a maroon and white yurt) Prince Henry, resplendent in patent leather high heeled boots, tights, ruffled shirt and jerkin (with just a hint of glitter accentuating his cheekbones), leads us through his search for true love in a magical kingdom where he is the only gay.

Rich Watkins, creator/performer (AKA Prince Henry) assisted by Denholm Spurr (director), Simone Murphy (choreographer) and Lex Kosanke (music), among others, takes us on a high paced 60-minute journey of a Disney Prince seeking his true love.

We meet Prince Henry’s Fairy Godfather who transports him to the present day to see what the real world is like and to learn to accept his sexuality. Armed with this essential knowledge he returns to his magical kingdom and tries to find happiness with the 7 dwarfs, particularly Sleepy, Doc and Happy.

He seeks the approval of the Great Oracle. Unsatisfied with the Oracle’s rejection he decides not to change but rather be confident in his own sexual choice. Does he eventually find true love? Well, you will have to see his show to find out.

Watkins is a dynamo, never flagging, never lost for an ad lib and dances up a storm in impossibly high heels. He gives his all and quickly endears himself to his audience. It is a bravura performance!

With liberal mentions of sex, Grindr, PREP, drugs and toys this show has a R18+ rating. Prince Henry gives new meaning to ‘Someday My Prince will c*m’ and ‘Let It Go’, accompanying these with costumes that range from the typical Disney Prince to leather and glitz.

It would be easy to dismiss Happily Ever Poofter as yet another campy show, but it’s not. It addresses the important issue of acceptance, which is not limited to the Gay lifestyle, all done with a liberal dose of laughter, song and just a touch of compassion.