A Happy And Holy Occasion 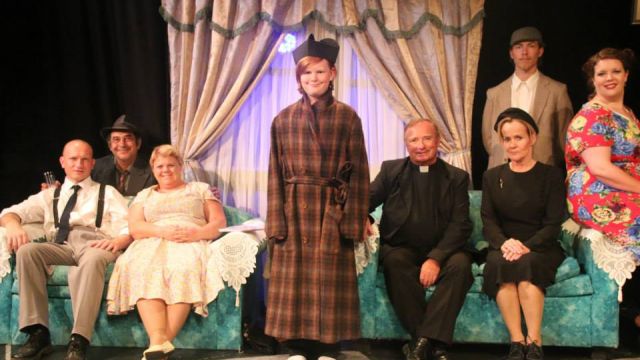 Campbelltown Theatre Group wraps up its 2014 season with an excellent production of  A Happy and Holy Occasion.

This play mixes humour, heart, drama, and darkness in equal amounts, as it tells the story of a family gathering in the home of the working class Irish-Catholic O’Mahon family. The “happy and holy occasion” is the farewell dinner for the youngest child, 12 year old Christy, before he leaves to train for the priesthood.

The play is set in early 1942 just before the fall of Singapore in WWII in (our) Newcastle. Back then 12 year old boys were able to enter the seminary at such a young age, although many were motivated to do so as a means of escaping their poor surroundings.

Others join the family for dinner. There’s the parish priest, who likes a drink. The father’s best mate, an uptight religious type who’s never had a girlfriend. The mother’s friend, a down to earth free spirit. The boy’s grandfather, a successful businessman who can talk the talk. The mature-age busybody spinster is the last to arrive. She is the town’s wealthiest woman and self-appointed adjudicator of morality. As you can expect, the evening ends up being far from happy or holy.

It may all sound like an Aussie mix of Angela’s Ashes meets August: Osage County with a pinch of The Devil’s Playground but this play is very much its own thing. It perfectly captures the era with its racism (post-war European immigrants had yet to arrive so the Irish, English, and born-here Aussies could only be racist to each other), misogyny (a wife and her property belong to the husband), sexual mores (only “bad” women wear nail polish), domestic violence, and understanding of the Catholic Church as it was back then: all fear, rigidity, and repression.

Like all good plays that take snapshots of a particular era, this play holds up universal truths to which we can all relate in the modern day. The play was written in the 1970s and while some of the references may have dated (not many would get the comments about Cardinal Gilroy or the joke about the OMI) the material is still relevant.

First-time director Greg Taylor does a good job. Greg is a professional lighting designer and it’s good to see someone who’s worked on the tech side of theatre make a successful first go at directing. His set design, along with Alisha Carpenters’ lights, show just how effective you can be by keeping things simple and using a bit of imagination– especially in the Act 2 flash-forward scene.

The cast of eight is uniformly good. The characters can easily come off as caricatures if not done properly and this cast made them credible and human. The Irish accents worked a treat. Minor quibbles were that a few times a line was not delivered with conviction, but it seemed to be for the sake of keeping pace. Highlights for me were Stephen Wheatley as parish priest Father O’Gorman, David Villanti as grandfather “Houses” O’Halloran, and Michelle Butcher as sanctimonious town matriarch Miss Siss.

A thought-provoking and moving production. Recommended.