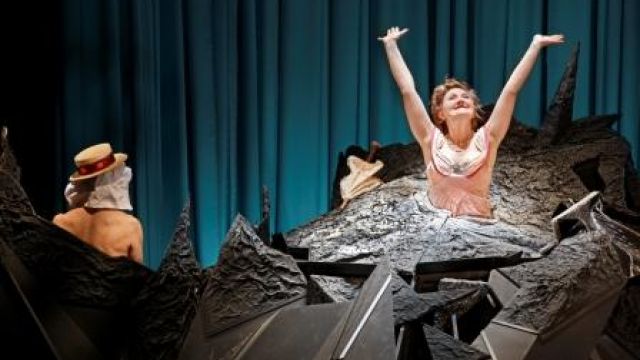 Yes, this is the play which features a middle aged woman who is half buried in a large mound of earth. It’s one of those iconic images, much like Edward Munch’s The Scream is to the visual arts. Now is your chance to see the play which this image comes from. Belvoir Street is currently presenting Malthouse Melbourne’s production of Samuel Beckett’s classic play in its upstairs theatre.
Michael Kantor, the Artistic Director of Malthouse Melbourne, helms this strong production. Julie Forsyth plays Winnie, the half buried woman. Peter Carroll is her husband, Willie, who lives in a hole in the ground behind her. Winnie only has the contents of her handbag to divert her whilst the sun bores down on her relentlessly. She has a revolver in her handbag in case it all gets too much. It nearly does, especially after interval, when the sand level has increased and comes up to her chin. Its Winnie’s yearning for love, and her fond memories of happier times with Willie, that somehow sustain her.
The performances are exemplary. Julie Forsyth nails one of the great dramatic roles, in Beckett’s searing, tragic portrayal of the 20th century housewife, enslaved by duty, but with a perpetual grin and bear it countenance. Peter Carroll gives a great performance as Willie, the once wooing husband who has since become little more than a broken-down clown.
The production values are strong; Paul Jackson’s lighting wheel that lit the actors from above, Anna Cordingley’s symbolic stage filled with broken shards of metal and debris, and Russell Goldsmith’s haunting, reverberating soundscape.
Michael Kantor’s production of Happy Days plays upstairs at Belvoir Street Theatre until December 16.
David Kary