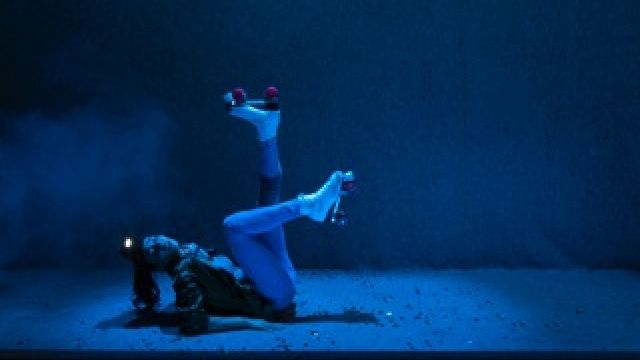 This much anticipated offering is an entrancing, resonant, contemporary interpretation of Wilde’s deeply moving work that meets expectations of excellence.  It seems to be the hot ticket of this year’s Midsumma Festival and has pretty much sold out.  So hopefully there will be another incarnation in the not too distant future.

Wilde’s children’s story The Happy Prince, like Paul Gallico’s The Snow Goose, E. B. White’s Charlotte’s Web and Hans Christian Anderson’s The Little Mermaid, is highly compassionate and profoundly moving.  These stories, and there must be others, if read or heard as a child are assimilated in a profound way and stay with us for life.

Stephen Nicolazzo’s careful direction barely leaves a hair out of place and every subtle interaction on stage seems integral and necessary.  It could almost be a film - with perfectly set up frame following perfect frame.  Nicolazzo is, if there is such a thing, a Theatre Auteur.  And everything in this work, as it is unfolding, seems to explore and exude Wilde.

Janine Watson’s Prince has all the elegance of a 19th century statue.  She also has some of the self-importance, sense of command and an edgy soupçon of cynicism found in some of Wilde’s well-known theatrical characters.  The Prince’s heart and sense of empathy is as huge as her capacity for self-sacrifice.  Watson has the skill as a performer to convey considerable depth and potency. 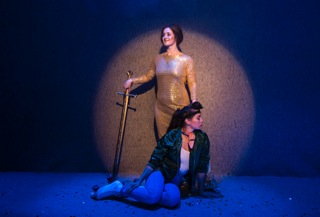 Catherine Davies’s Swallow is a street wise, somewhat cocky, self -aware roller scatter with a delightful dash of humour.   Davies’s physical skills come to the fore allowing us watch the Swallow metaphorically lose the capacity to fly and fade and freeze at the feet of her beloved statue.

This staging of The Happy Prince has traces of the milieu of a Victorian Peep Show and the hint of a tawdry illicit edge.

Sound Design and Composition by Daniel Nixon is rich and marvelous.Eugyeene Teh has created a unique and special space in tiny La Mama and simplicity seems to be her key.

The concluding text spoken by Watson is hauntingly beautiful but also oddly jarring as they are not actually part of the original children’s story.

Set and Costume Design – Eugyeene Teh