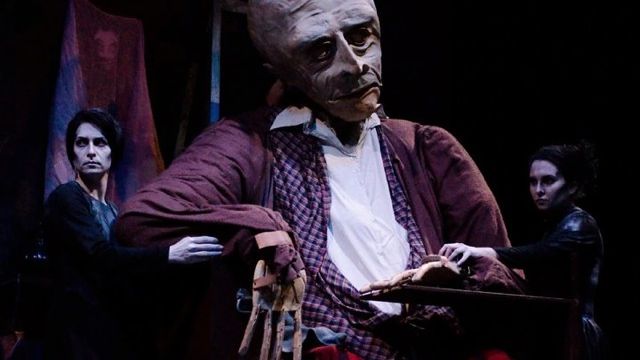 This is a provocative, imaginative fantasy, gothic at times but totally enchanting.

If you grew up in the eighties and nineties when nursery stories (especially Grimms’) were subjected to severe political correctness restrictions, here is your reward!

The prototype filled houses in La Boite’s 2011 Indie season. One hour long with no dialogue, the audience had to imagine their own version of the story from the back projections.

This new version still revolves around the unnamed street waif (played again superbly by Kathleen Iron) and the three-metres-tall puppet, now with articulated fingers and able to talk, and graced by name Old Albert. You still need to interpret your own version of the story. The reality happens in the old man’s bookshop/home, but now the girl and Old Albert establish a prickly, if affecting, relationship. The rest of the story happens in the girl’s mind. Two moments melted my heart (both when the old man was asleep): the girl climbed up beside him and wrapped his arm around her. Apart from having discovered the joy of stories, to me, she had also found a father/grandfather figure to give emotional direction to her miserable life.

Special kudos to Barbara Lowing, Niki-J Price, Anna Straker and Giema Contini who manipulated over twenty puppets. To the numerous creatives who brought this show to life, Bravo!