Has Alice Frikkin a Ghost of a Chance? 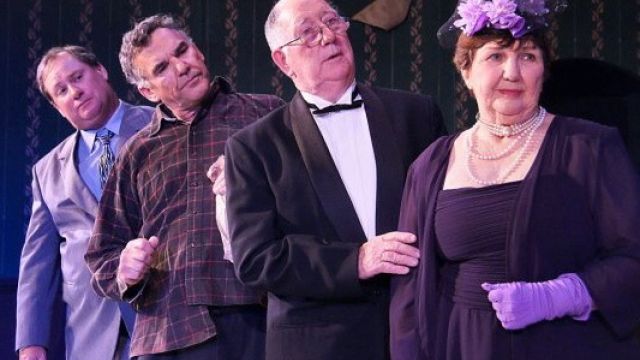 In a departure of style from his intense, thought-provoking plays (Butcherbirds Cry at Midnight, Echoes in the Mist and Gathering Shadows) local playwright, David Scott, entertained a small, responsive audience with the premiere of his latest work; a comedy/fantasy Has Alice Frikkin a Ghost of a Chance?
Set in the present, Alice Frikkin (Kellie Eatock) is a lonely but friendly and beautiful ghost haunting an old house, and she has no memory of her past. When the Crapp family buys the abandoned, “renovator’s delight” and move in everything changes — for everyone. Frank Crapp (Kevin Ryan) and his son Steve Crapp (Jack Harbour) immediately set about the task at hand, while Frank’s wife Mary Crapp (Pam Ryan) unpacks boxes and reluctantly commences setting up home. Their daughter Zyste Crapp (Mish Graham) has adopted a Goth persona to express/find herself.
Aside from a local drunk (Kevin Smith), Uncle Jim (Trevor Love) is the first mortal to see Alice. Alice and the naïve Steve soon fall in love. Stalker-Brown clearly visualized the association of the ghost Alice and the mortal Steve as a remote closeness. They got very close but never touched each other — cleverly heightening the sense of the ‘two separate worlds’.
In a simple, classic box-set, the lighting was straight forward. The use of a pale steel blue-white heightened Alice’s presence; while the warm amber glow from the solitary candle was effective. Sound effects (a howling wolf, wind and thunder) were not overdone, being appropriate where used.
A cameo appearance by the playwright (David Scott), in ghostly form, as Alice’s shunned suitor completes the story for the odd-ball members of the family who have to deal with someone even stranger than themselves!
Russell E Williams