The Hatpin by James Millar and Peter Rutherford 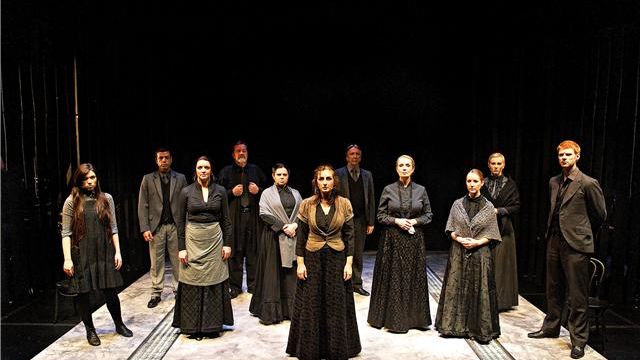 Riverside Lyric Ensemble’s production of Australian musical The Hatpin is in the higher echelon of Sydney amateur musical theatre, in terms of both production values and performances. It is a clean, polished, no-frills production, with a cast balancing some of the best ‘old hands’ on the circuit with exciting, less familiar talents.

If, like me, you saw the premiere of this musical at the Seymour Centre in 2008, you’ll probably feel that The Hatpin has been re-written to advantage. The writer, in the audience for the Amateur Premiere, confirmed that the piece has undergone considerable changes.

The intimate Lennox Theatre, too, provided a far more sympathetic venue for this chamber musical.

The grimly themed musical will not be to all tastes. The murder of innocent infants and the subsequent pursuit of justice are at its core. The Hatpin is based on the true 1892 story of young single mother Amber Murray, who gave her infant son into the care of temporary child-minders, while attempting to build a better life for herself and her son. The title refers to the murder weapon used to dispatch the infants.

A tight ensemble cast delivers both acting and vocal goods. In the more substantial roles, Sarah Blackstone is a vulnerable, yet determined Amber Murray. Penny Dunn is warm, witty and engaging as Amber’s salt of the earth friend Harriet Piper. As the deceptively ordinary villains, Agatha and Charles Makin, Michele Landsdown is convincing, in turn apparently sympathetic, then cold and remorseless, while Christopher Hamilton portrays an eerily respectable brand of evilness. As their brooding daughter Clara, Erin McMurdo’s late show musical soliloquy in which Clara gives up her parents is powerful.

As you’d hope in an Australian musical, the voice is often an Australian one, though I was frequently struck by derivative Sondheim or Les Miz moments in the score.

I really wish that this production hadn’t re-used the original’s overkill black costuming. It’s too heavy-handed to be called symbolism. Strategic colour, lightness or brightness might enhance the drama. However, I applaud the decision to set the show using only an effective floor design and a handful of chairs. Technically, both atmospheric lighting and well-engineered sound enhanced the experience.

Despite the improvements, The Hatpin still doesn’t make my top twenty musicals, but it’s far from the bottom of my list. This Riverside production illustrates just how non-professional theatre can continue to build the reputation and effectiveness of a work which might otherwise sink without trace after a brief professional run.

If you’re prepared go to the dark side with your musicals, and accept far less than the usual light relief, this impressive production is well worth the effort.

On balance, I feel the work, as presented at this Amateur Premiere, has improved perceptibly on the earlier version.