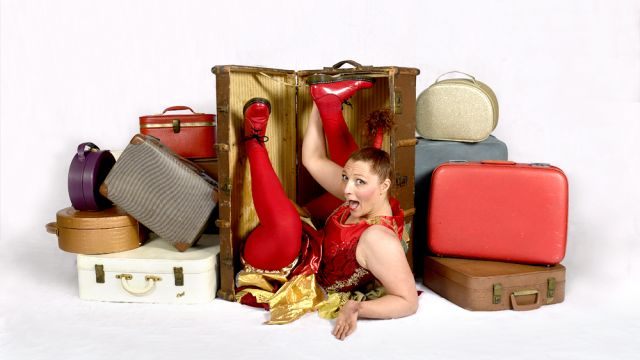 This show has suitcases full of delightful offering for early childhood audiences and features internationally acclaimed juggler Hazel Bock. Bock’s captivating performance displays her craft and incredible dexterity. The performance begins with some traditional juggling and Bock astonishes the audience as she gradually increases the difficulty of the juggling challenges, frequently involving both hands and feet.

Her stage persona appeals to the audience’s willingness to collaborate and they are actively involved in ensuring the success of her juggling acts. Bock works with juggling balls and juggling rings and creates mesmerising patterns in the air and her audience remains astonished and fixated on the colourful patterns she creates.

The show includes some clever shadow puppet work and keeps her audience guessing as well as imitating her expressive hand gestures. Bock interacts with her audience primarily through mime and gesture. During some acts objects fly around the space to the amazement of both young and old spectators. Bock’s clowning skills are beautifully executed and exploited throughout this show.

The highlight of the performance is the finale where Bock displays incredible ability to juggle objects of almost any size. Her control over the large cumbersome items is a testament to the precision and impeccable timing of her circus artistry. Bock’s show employs a variety of simple but effective entertainment techniques that stimulate the imagination and has her audience enthralled.