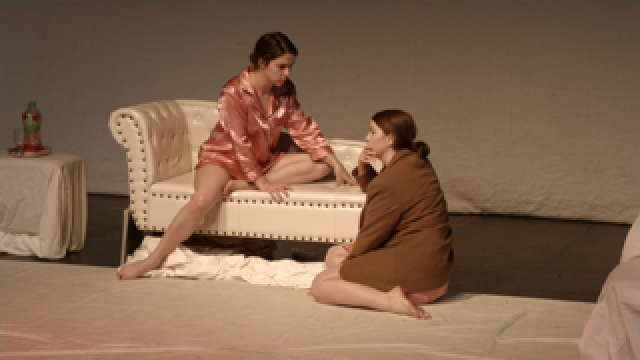 Wow Hedda GablerGablerGabler is a great little show that frankly opens up the text of Henrik Ibsen’s Hedda Gabler for illuminating exploration.  And most particularly, it does this through the prism of a young woman/women’s sensibility.  It is vital and enlightening as to contemporary perceptions of this classic.

Written in 1890, Hedda Gabler is a play that has a long and lustrous history – a classic that has stood up to close examination through restaging after restaging.

Director Mary Angley prefaces her noteworthy examination of Ibsen’s play with a marvelous program note - to paraphrase:  In London’s Vaudeville Theatre, actress Elizabeth Robins, who was playing Hedda, reported that she overheard a woman in her audience utter “Hedda is all of us”.  Those who have watched numerous ‘Heddas’ have our own particular understanding of her predicament that, more than likely, has morphed over time.  And there can be no doubt it is one of those roles many, many female actors would love to play.

To fully appreciate the complexity of Angley’s unique probing work it would be helpful to have a pretty good grasp of Ibsen’s text.  However, regardless of prior knowledge, there are enough wacky distractions and interesting role-plays for an everyday audience to be engaged and entertained byHedda GablerGablerGabler. 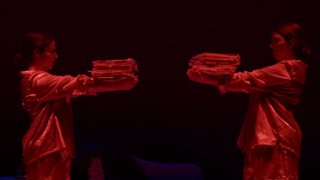 Engagement is also assured through a number of games scattered between the enacted scenes.  These keep the three actors on their toes.  Pardon the pun because one of the games involves painting their toe nails at a rapid competitive rate.  Then there is a brutal competition of who can hold the very heavy weight of a number of books for the longest time.  Another involves filling a water pistol with tomato juice that stains the white flooring like menstrual fluid would.  These games seem to be finely tuned to the themes being explored.  They bring out the competitive natures of the performers.  At the same time they underscore Hedda’s competitive psyche and highlight her femininity.  And they are the decider as to who plays Hedda in the ensuing scene.  This explains an added frisson of suspense as well as the intense focus. It would be highly challenging for actors to be unsure of which character they are playing right up till just before a scene.  The stakes are very high in these drama games.

Much of the time all three actors wear pink silk pajamas.  The atmosphere is intimate and like that of a sleepover.  An actor donning a suit jacket signifies the portrayal of one of the male characters; Tesman, Judge Brack or Lovborg.

Emma Jevons brings a lovely lithe quality to both her Hedda and Tesman.

Hedda GablerGablerGabler highlights Hedda’s massive difficulty in maintaining intimate relationships, emphasizes her spiteful behavior and suggests that she has a deeply destructive nature. 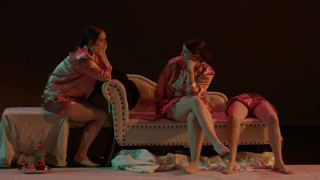 As I write this I am wondering if Hedda and her motivations could be more discretely explored by each of the three performers with the possibility of finding a variety of types of Hedda to further enrich an already vital and noteworthy piece.

I have considered the Hedda I have observed over the years as more sinned against then sinning.  As a passionate creature trapped in untenable circumstances she elicits empathy.  However that may be a particularly romanticized view of this fictional character.  And I thoroughly enjoyed the challenges to this notion provoked by watching Hedda GablerGablerGabler, where she is pretty much portrayed as scurrilous by all actors.

The choice of scenes and the way they are presented accrue to suggest that Hedda is not merely a deeply frustrated passive aggressive but a fully-fledged manipulator, more sinning than sinned against.  In doing so it opens up a conversation that could quite possibly benefit from a rigorous comparison of the social mores of the late 19th Century and the present time. 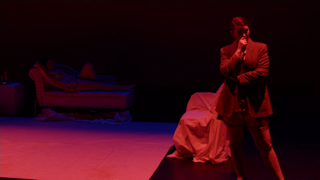 Angley references Ruth Wilson’s Hedda Gabler of the National Theatre film.  Wilson’s Hedda is also a modern Hedda, though from what I remember her sense of entrapment was still, never the less, palpable.

I really enjoyed watching the somewhat risky and lively work of this emerging director and will certainly keep an eye out for what Mary Angley does next.