Hell Ship: The Journey of the Ticonderoga 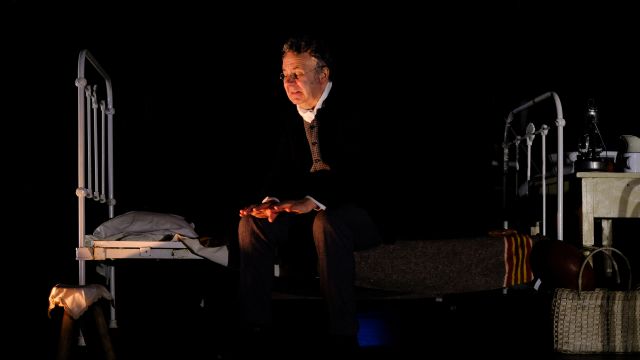 It’s always somewhat mind-blowing from the perspective of the relative comfort and safety of our 21st Century lives, with our antibiotics and immunisations and understanding of the importance of hygiene, to imagine what it must have been like for our forebears. Even those with relative privilege were vulnerable to the sort of disease that’s almost unthinkable to us today. That reminder, presented with some fine story-telling, is what makes Michael Veitch’s new show Hell Ship so very compelling.

Hell Ship is a one man show performed by Veitch which acts both as marketing for his book on the same topic, but which also stands as a theatrical piece in its own right. Unlike his previous show Flak which was a series of anecdotes, here he performs entirely in character. He was inspired by the story of his great-great-grandfather, a doctor on the ship Ticonderoga. Packed tight with poor people hoping for a better life, the Ticonderoga was en route from Liverpool to Melbourne and had just traversed the Equator when it was struck by the first case of typhoid. Eventually 170 of the 800 passengers died.

Veitch’s story-telling style is tremendously warm and engaging. The character he draws is not strictly natural, but a beautifully drawn caricature, full of life and compelling to watch. He has captured a certain musicality of the language as it was written and presumably spoken in the 1800s—those long, rhythmically complex sentences that went out of vogue in the 1900s. He delivers these lines with comedic timing, moving into rapid fire urgency as the horror of the situation becomes apparent. As an audience, we come to empathise with ship’s inhabitants as we imagine the truly horrific conditions and awful inevitability of what would happen.

This is a fascinating and moving story, beautifully presented and guaranteed to shake people out of their 21st Century complacency.