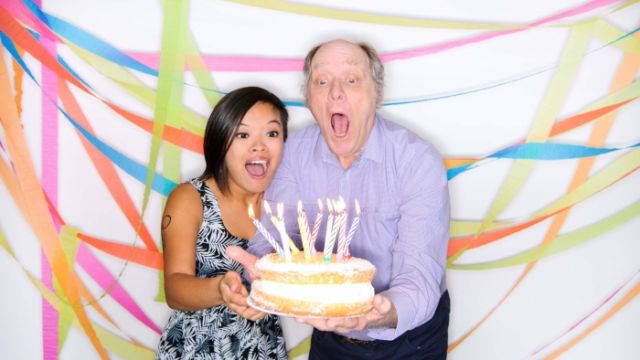 Winner of the 2014 Green Room Award for outstanding writing/adaptation for the Australian Stage, Roslyn Oades’ and her cast use her very unusual ‘headphone verbatim’ documentary theatre technique to explore both coming of age … and ageing.

Based on eighty long-form interviews with late teenagers and over 80 year olds, Oades set out to explore “the bookends” of life – the beginning of making one’s own way in life, and the looking back nearer the end. Not all of the interviews are featured in the finished work, but they are all part of the research that led to the poignant insights of the final ‘audio script’.

The style is a little difficult to accept as the script is recorded and played to the actors through headphones. Veteran actor Jim Daly plays characters as diverse as a stroke victim and a young man celebrating his eighteenth birthday. When asked about the use of headphones, he explained that, once one is used to distinguishing the different characters as they are heard, it becomes easier to take on the characters, and probably works more smoothly and realistically than learning from a printed script.

It might be interesting to see a director’s take on the play from a script, but certainly this type of production is fascinating and the characters – performed by Daly, Roger Oakley, Evelyn Krape, Aileen Huynh, Izabella Yena and Matthew Connell – are believably real and effectively honest.

When presenting the ‘old’ characters, the actors radiate a kind of suppressed energy that validates the humour and continuing joie de vie of the characters despite their age and situations. They look back on life with pleasure and face the future seemingly without fear. The younger characters they portray are suitably blasé and self-absorbed, living in the moment with their mobile phones in hand.

The selection of material Oades has chosen from the many recordings provides thoughtful insights into the perspectives of the young and the not-so-young. It is an appealingly entertaining portrait of the “candid thoughts, fears, loves and aspirations of those struggling with where to begin and how to say goodbye”.