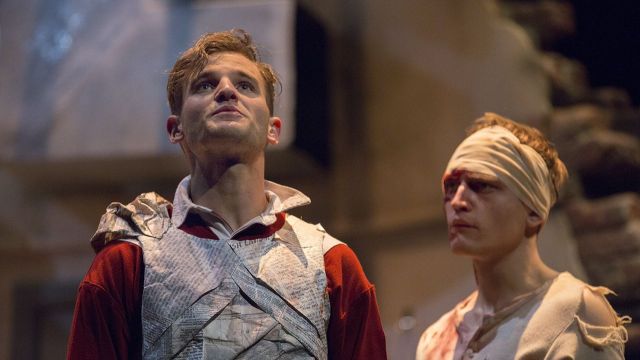 There are those who say that Shakespeare is outmoded, obsolete and irrelevant in modern theatre. Let them see this Henry V and then voice such claims about history’s greatest storyteller. Let them argue with the “Band of Brothers” that is Bell Shakespeare.

Damien Ryan gives us a marvellous adaptation of the play and bridges the 500-year gap by setting it during the Second World War, in a school that is battened down and bombed in the Blitz. This removal to a time in history much closer to our own understanding and chronology gives the play a freshness and accessibility that engages the audience from the almost film-like montage of vignettes, setting back story for us through the students and teacher exploring the text of Richard the Third and Henry 4. All the while bombs fall outside, windows are shattered, and the lives of students, boys and girls, and teacher as well as school nurse, are thrown into life and death situations, much like Henry’s young soldiers at Agincourt. 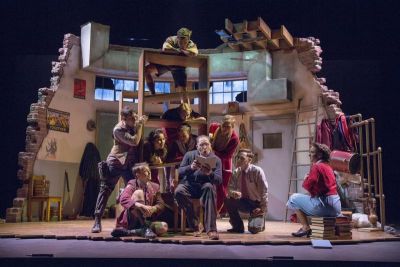 This fascinating and energy filled opening to the play allows us to connect to the text vicariously through the teenage students themselves. It’s a brilliant and innovative choice and Damien Ryan directs it to perfection. There is initially larrikinism and a sense of adventure amongst the isolated schoolkids. They write things on the blackboard, they read haltingly from the play’s text, and almost imperceptibly become the characters. Overturned bookcases become the boats to Calais, with a terrific effect of the sea; stacked books become seats, newspaper hats-crowns, batsman’s pads-armour; pencils are daggers, croquet mallets – clubs; splintered wood and rolled up newspapers– swords. We suspend disbelief and accept them, because the boys themselves accept them. In Act Two a plane crashes and the schoolboys take a German airman captive – his parachute provides the tents in the camp, and a canopy for the fallen.

If this seems pushing the envelope too far, and straying into the area of gimmickry, this is not the case. As one would expect, Bell Shakespeare has faithfully upheld the writer’s intent (an imperative for this reviewer). This is a truthful Henry V, and if our access to it is through teens learning the play, so much the better. The original text does start with the chorus introducing us to the players who will tell the story of Agincourt, entreating the audience to imagine. The parallels between war in the 1940s and centuries earlier are obvious, and the blackboard even tells us that the date is Oct 25th - St Crispin’s Day. Some may find the transitions from boys in the “real life” schoolroom, to Henry and his cohorts as Shakespeare intended, difficult to follow, others like myself will find it breath-taking. There is also far more humour than we are used to, through the antics of the schoolboys, and some comic business altering what is on the blackboard. There are parallels of deaths within the play and within the blitz situation, and the ghosts remain in the classroom, witness to how good intentions become a thirst for blood and revenge. 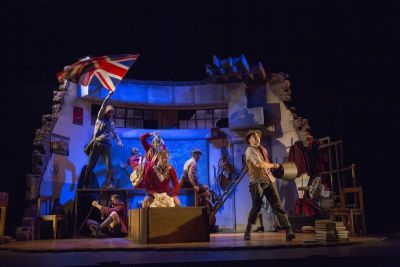 Performances are, as one would expect, excellent throughout, with most of the cast of ten playing multiple roles. Keith Agius gives gravitas to the aging, cardiganed, teacher, and his glorious voice is heard to advantage as the chorus and the King of France. He even dies, as Falstaff and as teacher, during the lesson. Michael Sheasby is excellent as Henry V, the one time playboy determined to make good. Though he has some advantage in playing only one role, he nevertheless finds a perfect balance between head boy and King persona. Drew Livingston’s Welsh accent was in flux as Fluellen but he was impressive as Orleans and Bedford and must be applauded for the splendid a capella vocal arrangements throughout as the school choir and the French Soldiers sing their patriotic anthems. Danielle King gives four terrific performances but it’s her Alice, to the delightful Eloise Winestock as French Princess Katherine – and their scene together learning English, which provide a lasting memory. Matthew Backer is excellent in all his roles but particularly notable as the Dauphin and the rest of the cast are uniformly good throughout. Sian James-Holland’s lighting is excellent, particularly in the air-raid sequences, as is Steve Francis sound design, effects and underscoring. The overall excellence though is thanks to Damien Ryan’s vision, innovation and sympathetic direction throughout.

I hope that schools throughout the country will get to see this marvellous production and fall in love with Shakespeare for the first time…all over again. Well might Harry, in his rallying speech, have said “Cry God for Australia, Theatre, and Bell Shakespeare.”