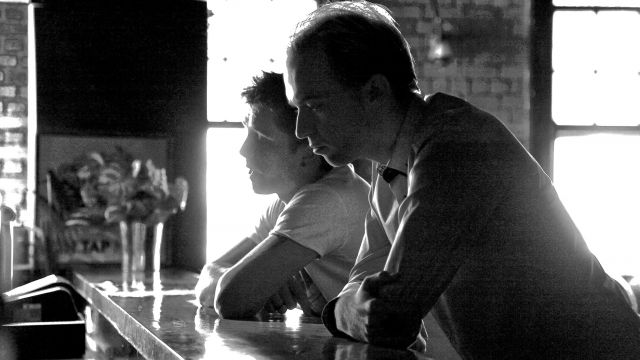 A rock band formed by high school mates is on the brink of success: after years in pubs and other low status venues, they are about to sign with a prestigious label.  But all is not what it seems.  Long hidden undercurrents, repressed animosities, jealousy and even loathing surface in the suddenly openly fraught relationship between band founder Nick (Blake Stringer) and lead singer Jake (Matt Phillips).  Sacrifices have been made for the sake of ‘the band’, but now, with recognition and money at stake, naked ambition comes out.

Director Dexter Bourke keeps what could be a static two-hander moving and he has cast cleverly since the text itself involves overturning first impressions.  Mr Stringer is tall, thin, rather ascetic, neatly and stylishly dressed - and speaks carefully in an ‘educated’ accent.  Mr Phillips is shorter, compact, muscular, wears a slogan T-shirt and ‘ripped’ jeans.  But as the play proceeds, Mr Stringer’s Nick is not so nice, and Mr Phillips’ Jake, originally loud and coarse, is smarter and more articulate than we might have thought. It is difficult to say more without giving away the clever twists and reveals in this short (just under an hour) piece, but much hinges on an under-age fan named Rosie and there are twists and reveals up until the final moments.  The text sags briefly in the middle when accusation, denial, counter-accusation and counter-denial become a touch repetitious, but the next reveal pushes things along nicely.

Heroes (the title is surely ironic) is a chamber piece.  Ideally it could be one half of a double bill.  Clever as it is, it’s not quite substantial enough for an evening’s entertainment, but it will have you chuckling and engrossed.