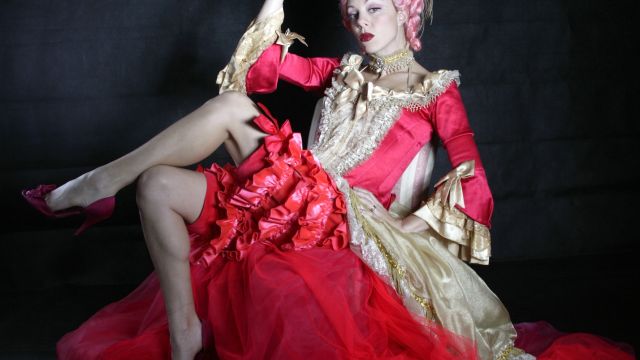 Burlesque. As an art-form, it's been around a very long time. Hundreds of years, in fact. But in relatively modern times, people have come to think of it as just another word for a 'strip show'.

However, in the early days it was a showcase for parody, satire and biting social commentary.

Imogen Kelly is touted in her press release as "Australia's Queen of Burlesque" and it's easy to see why. Her athleticism, physical comedy and the larger-than-life-characters she embodies, reflect a performer who has truly honed her skills to make her every (at times ungainly, yet graceful) move, seem genuinely effortless.

The theme of this show, is to poke fun at the rumour and innuendo that surrounds some of the most powerful and prominent feminine figures throughout history, including Queen Victoria, Catherine the Great, Maggie Thatcher, Joan of Arc, Julia Gillard and Princess Diana.

And, in poking fun at the rumours, to highlight the absurd lengths to which some quarters have gone, in order to discredit, humiliate and debase this eclectic bunch of icons. It's a clever concept and for the most part, it was duly fleshed out (no pun intended). And, at times it even proved enlightening - I did NOT know about the grotesque and unseemly rumours surrounding Catherine the Great's Demise, for instance.

However, the strongest moments in the show are when Imogen's formidable physical talents and comical choreography are taking centre stage, safely behind the fourth wall. But moments where she tries to enlist audience participation fall a bit flat.

Vashti Hughes chimes in valiantly as whacky psychic medium Madame Blavatsky - a character whose presence is ostensibly to kill time between Imogen's costume changes. However, while Hughes is clearly a fine comedian in her own right, she really has her work cut out for her to keep the audience amused. This particular schtick could do with some tweaking and more purposeful scriptwriting which would strengthen the show's backbone. With less fluff and more consistent jabs at The Patriarchy throughout, the promised message of empowerment would carry far more clout.

That said, it's most definitely fun night out, that will have you trawling through Google to fact check some of the more outrageous scandals raised during the course of the show.