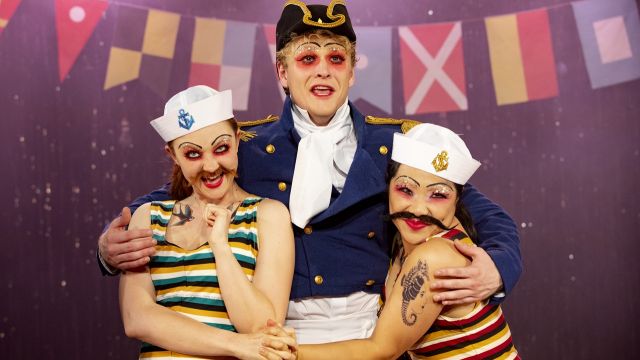 Peppered with Gilbert and Sullivan’s characteristically clever, rapidly enunciated songs, H.M.S. Pinafore is a musical with which G&S pursued a serious social purpose in the guise of comedy: to display the self-serving vacuity of the British class system as it existed at the time.

This Hayes Theatre production has retained the songs and adapted them well to the present day, and it seemed to follow the script, but managed despite this to take the show in a different direction entirely, focusing it instead on same-sex intimate affections via the device of casting women in most of the male roles and men in some of the female ones — fooling the characters themselves, incredibly, by the simple addition of false moustaches.

The lyrics of the ensemble pieces were a little difficult to make out, but were sung and played (by live musicians dressed as members of the ship’s crew) largely in tune, and the audio was handled perfectly.  If some of the men’s costumes looked to have been rescued from a production of La Cage aux Folles, most of the women’s costumes would have suited perfectly the big-chested male sailors who actually manned the ships of the time.  The simple set was more than adequate in depicting the ship’s deck for the show’s entirety, and was brilliantly lit.

The show may not have the same target audience, or appeal to the same social sensibilities, as G&S intended it to, but will be a frolic for anyone finding something fresh or original in men’s taking women’s parts and vice versa.