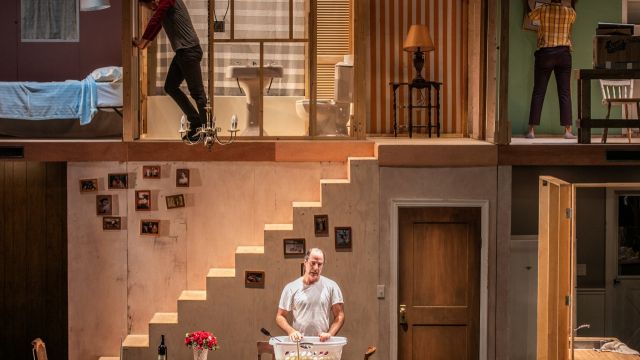 Conceived by Geoff Sobelle, after discovering different layers of floor covering in the kitchen of his one hundred-year- old Philadelphian house, the production is a tribute to innovative contemporary stagecraft, meticulous choreography and timing and the creative inspiration of collaborative theatre-making.

Sobelle: “I work in collaborative theatre because I believe that the really good stuff doesn’t come from the writer’s room – it comes from the space. It comes from the designers and performers leaning into each other.”

Thus, in the ‘space’ – a bare stage – a house is precisely constructed (the ‘designers’), by seven builders and tradesmen (the ‘performers’), who erect walls, fit doors, install, furnish and equip a bathroom, a kitchen, a bedroom, a study and a living room. Then, over the course of one hundred minutes, transform into a myriad of characters who make the house their home.

Their stories are told in non-verbal, visual, physical theatre. To the audience, it is a carefully planned on-going narrative that runs seamlessly from one scene to another, chronicling passing years and changing inhabitants, their differing relationships and rituals. From collecting the laundry to sharing a bathroom, the actors weave a magical vision of the intimacy demanded of a home, and the joys and tribulations this can bring. 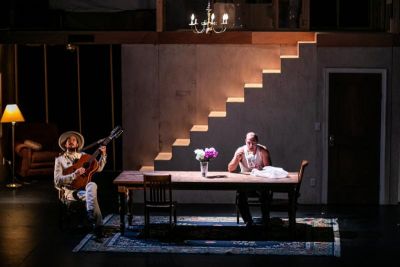 From the beginning, the performance is interactive. At first the audience is welcomed into the household by gestures and unspoken ‘asides – like an open hand that invites the admiration of a building triumph. They are intrigued by different techniques that show the passing of time: measuring the years by recording the height of a child on the kitchen door frame. They are titillated by a bathroom scene that involves naked bodies moving in and out of the shower and on and off the lavatory!

Later, while party lights are erected across the theatre with the help of the audience, other members of the audience are invited into the house, and, via whispered instructions and gestures become part of ritual celebrations that are intrinsic to family life: a birthday party, a graduation, a gay wedding. Some don fancy dress, others have a pillow fight. Some are taken on stage in a conga line. All dance to the music of a four-piece band that materialises. Eventually they are gathered together by the cast to become part of a funeral service. They surround the body, and to the eerie voice of troubadour Elvis Perkins, and further whispered direction, mourn, turn to face the audience, look to the right and sway gently together in perfect time.

Two then become narrators talking, unprepared, into a microphone about their memories of their first home. As their voices play over each other, the remaining ‘cast’ begin the process of moving house. Photos are taken from walls and packed into boxes that are stacked, with in front of the set. Chairs are piled on top of them, whilst stair bannisters and bedroom furniture are removed from the upper storey, and plastic sheeting, used in the very early moments of the production, is re-stapled to wooden frames. All happens in perfect time, and, as the audience members are skilfully escorted from the stage, the light fades and fans blow the plastic sheeting in a ghostly illusion of times that have passed. These final interactive scenes are a miraculous piece of planning – and trust. It is a credit to the poise and sang froid of the actors that so many realistic characters, so much action and such confident participation can be inspired by so few words and such brief directions.

This production is awe-inspiring in so many ways. Apart from the construction itself – the co-ordination of fitting the pieces fit together, the stability of the structure, the timing and concentrated pace that is constantly sustained – there are atmospheric moments that, though theatrical, are movingly real, like the light of dawn creeping softly and gently across a sleeping house, or a moth fluttering against the glass panel of a lighted doorway.

There are, as well, so many little ‘events’ that are easy to miss, but define the real-ness of family life, like, for instance, a child climbing out his bedroom window and being brought home by the police! Such is the prodigious value of the collaborative process – ideas and experiences are shared, considered, workshopped, and whether rejected or incorporated, bring “the really good stuff” that makes this production so real, so entertaining and such an absorbing piece of theatre.