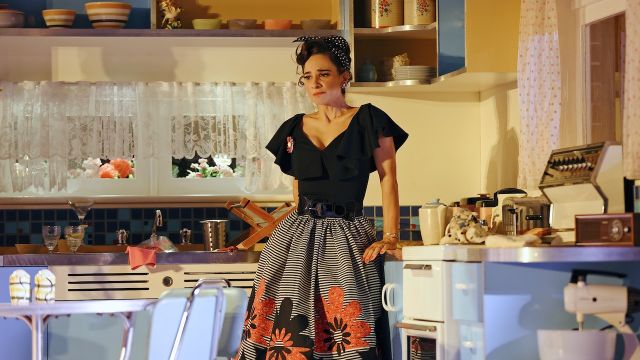 Oh, how they love building a spiffing set at the Sydney Theatre Company. So, imagine the disappointment when the company’s stunning replica of a 1950’s flat in London was forced by the pandemic into storage last year, just weeks before the scheduled opening.

Dusted off a year later, we marvelled at the nostalgia. On one level of the brick row house was a gleaming kitchen, fitted out with the most modern 1950’s appliances leading to the chic loungeroom, where martinis were served under the watchful gaze of three ducks on the wall. Upstairs a bedroom connected by a hall to a bathroom, where every ceramic surface and tile was pink. Into this vision of middle century bliss swished in Judy (Andrea Demetriades), revelling as a domestic goddess. Closely following instructions from a housewife’s bible of the day, she gives every room a daily light clean, then once a week a deep cleanse behind the furniture.

Appreciating being handed his slippers as he walks in the door from work is the man of the house Johnny (Anthony Taufa).  The couple had an onstage chemistry which was as scrumptious as the smell of baked cookies. Spicing up their life was a sprinkle of music, dancing and visits from workmates and friends.

The appearance of a contraption from 2018 makes the audience realise that this was a couple choosing to re-enact a lifestyle of their parents. Giving them a reality check was Judy’s mother Sylvia (Tracy Mann) who actually was around in the 1950’s. “You’re living in a cartoon. The 50s were terrible. The idea that anyone would want to go back is ridiculous.” The reality of that era, she opines, was extreme cold, hunger and boredom.

Cracks emerge in the relationship as temptations strain their marriage and they struggle to pay the bills.

It strained credulity that the character of Judy could be fulfilled by choosing to stay home – without children – particularly as it emerged that she was the smarter cookie of the two, with higher income potential. Overcoming anxiety proved to the biggest challenge facing the leading character as she decides whether to stay at home or venture back into the workforce.

This play was popular enough in the UK to be transferred to the West End and has plenty of appeal for Australian audiences.