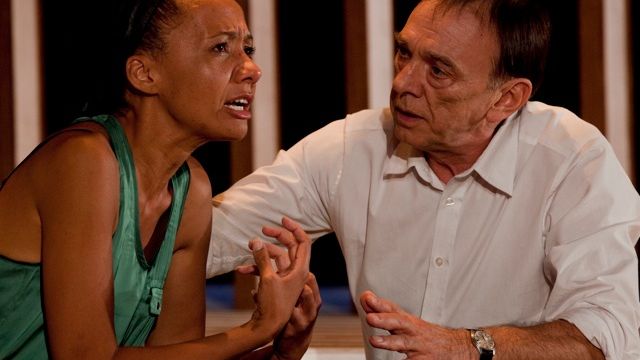 After 32 years of marriage, George (William Zappa) suddenly announces to Honor (spelt with no ‘u’) (Wendy Hughes) that he is leaving her. It unfolds that he is leaving her for a younger woman, a story that's been told time and time again. Mid-life crisis, older man leaves wife for young, sexy twenty-something and so on. But it is the powerful performances in this play that really make this production of Honour work.

The set design is fairly minimalist with white stairs and wooden uprights which could possibly suggest to us that the characters feel fenced in from their lives - trapped.

Murray-Smith says in the program “I realised that the truth of this story depended on understanding all four characters.” I think this is translated extremely well. The four perspectives are developed with sensitivity, although I think there is the most in-depth character development for Honor and Claudia (Paula Arundell), the journalist, with whom George has the affair. Arundell embodies this character with her svelte physicality and alluring expression, this character adds the balance this play needs. Claudia is a domineering, fiery young woman. She adds the zest the other characters aren’t in a position to have.

I think this play's main thrust - that an enduring partnership like marriage is a challenging and sometimes fragile entity - is an ever-present issue in society, therefore it speaks with much relevance for any audience. The themes of everlasting love, commitment, loyalty, betrayal and resentment will always challenge couples and in turn, families.

Although I was tempted to roll my eyes when yet another playwright or author writes about the central character being a writer, this production overall is sophisticated and elegant with a clever script and absolutely superb performances. This play makes us think about, talk about and reflect on the relationships in our lives. The common but universal themes of a husband chasing after a second chance at life and passion, a young opportunistic woman chasing a career and exploring her sexual powers, a daughter trying to figure out the meaning of true relationships and a wife wondering what happened to her secure, routine filled existence are enduring and will always offer dramatic possibilities.

For Honor this traumatic upheaval in her life ignites that old spark of writing talent that has been buried by the minutiae of her day-to-day existence. The character of Claudia stirs up strong emotions in Honor that have her reflect on her life. The young journalist prods and interrogates Honor and other family members; she shakes them up. There is a lovely scene where Claudia and the daughter Sophie (Yael Stone) sit on the steps and talk about what has happened. Stone serves the character delightfully as a frenetic, breathy young woman who finds it hard to express herself. Sophie is angry at the situation yet pensive when she exposes she wishes she was more like Claudia with her confidence and assumed strength of character.

This production is carried by the emotive character portrayals by the four actors. This is not a plot driven play but a play that rides on a dense, intelligent script. AFI award-winning Wendy Hughes delivers Honor with the perplexing astonishment this character feels in the situation she finds herself in. William Zappa is equally as engaging as George with his pacing, hand-on-head body language that conveys both verbally and visually his frustration and lack of fulfillment in his life.

This play is up close and personal. It may hit a tender spot for those who've come close to a situation similar to one of these characters as the delivery is so realistic. It’s a fly on the wall view into the lives of this upper-middle class couple’s exhausting, confronting, yet also tender and poignant journey through life and love.