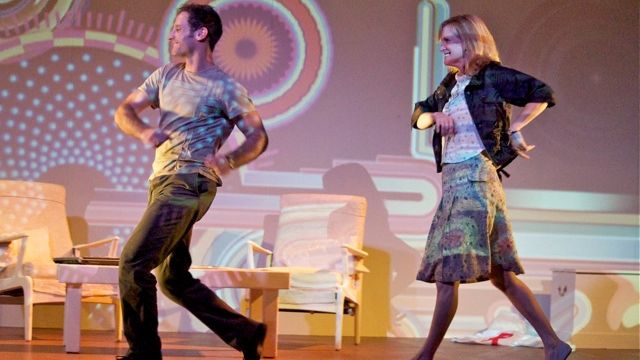 Hopelessly Devoted is a terrific, original and inventive two-hander musical play. With its songbook of Olivia Newton-John hits it can’t miss. It is set in the suburban lounge room of a middle-aged sister and brother, Amy and Andy, who are caring for their chronically ill mother. To help her cope with the depressing situation Amy escapes into a fantasy world where she imagines she is Olivia Newton John, helped at times by Andy who partners her in song and indulges her fantasies. As the mother’s illness grows progressively worse, Amy acts out the life and career highlights of her idol. Elise Greig is wonderful as Amy, capturing the song-style, flair and energy of her Newton-John obsession, and the pathos and poignancy of a caring daughter. Dan Crestini opposite her as Andy is equally as appealing in a role that sees him as a Rock of Gibraltor in a sea of dreams.

Musically both performers are exceptional. Grieg’s Newton-John turns are accurate and fun parodies, whilst Crestini, playing various characters such as Ian Turpie, Michael Parkinson and Pat Carroll, are silly and satiric. Highlights include a showstopping Grease routine where they don leather jackets and sing “You’re the One That I Want,” and a second-act Xanadu sequence which brings the house down. Greig does respectable solos of “Sam” and “Magic” with Crestini scoring on a riotous and rude, “Physical” and an emotional “I Honestly Love You.”

The whole show is performed to backing tapes of Newton-John hits in which the original arrangements have been recreated with dead-accuracy by Tony Byrne. Lewis Jones’s direction keeps the show moving with the psychedelic back projections by Saul Edmonds helping tremendously. John Clarke makes full use of Cresitini’s dance ability and has him leaping over and on chairs and generally making the stage seem like there are more than two performers on it. At the end of the first act you wonder where the show will go, but Grieg pulls a few rabbits out of the hat to pepper the second-act along including a late reveal that Andy is gay.

This was a premiere production and it’s in excellent shape. It obviously has a long life ahead of it both in the city and regionally. The show plays the Gold Coast Arts Centre in May.