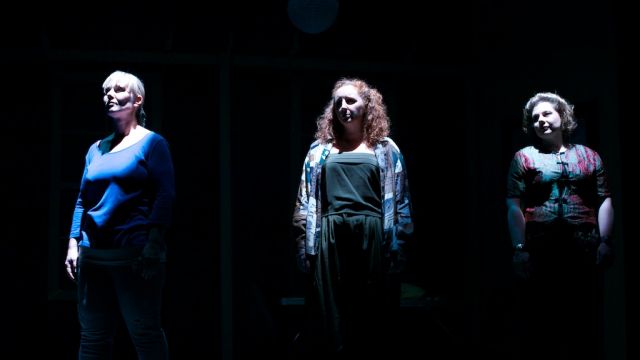 In Hotel Sorrento Hannie Rayson reaches into the heart of family relationships to reveal, gradually, the multiplicity of factors that both bring family members together – and drive them apart. She also comments about ‘national’ stereotyping … and misogyny!  So, though some may consider the play to be a little dated, its underlying themes remain tellingly relevant.

Because Rayson reveals her characters and their stories through multiple short scenes, it’s important to get the scene changes right, but there are moments in this production when the impact of scenes suffers because of an apparent confusion between lighting cues and direction. Sure, the number of scenes in this play calls for actors to move into and out of scenes relatively quickly, but it is even more important to allow a scene to end appropriately; to let the actors and audience savour the final moment of the scene and the messages that linger – about the characters and the plot. 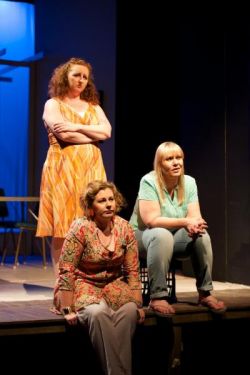 Carrying props on and off stage can also confuse the action, and this could be reduced in some short scenes, eg by allowing actors to stand sometimes rather than carrying chairs on and off the stage. In one scene in particular – a dinner party which is probably the apex of the exposition – the struggle for realism leads to some serious blocking problems that really minimise the impact of the scene.

These criticism aside, there are nice moments and some interesting performances. The play revolves around three sisters who meet at the family home after some years apart. Hilary (Sarah Purdue) has remained at home with her son, and has, perforce, carried the burden of caring for their dying mother and looking after their father. Purdue finds the natural, girl-next-door charm that Rayson has written into this role as well as the carefully concealed resentment that lies beneath her easy-going exterior.

Her two sisters – Pippa (Gemma Munro) a business woman working in America and Meg (Melanie Robinson) a novelist working in England – contrast markedly with Hilary’s small coastal town existence. Yet they too have secrets that mean the sisters cannot relate easily.

Munro’s Pippa is brash, ready to find fault and ungraciously critical. Her reactions are quick and almost too bristly. Robinson, who has more time on stage to develop her character, finds greater depth in Meg’s character, and thus gains more empathy. 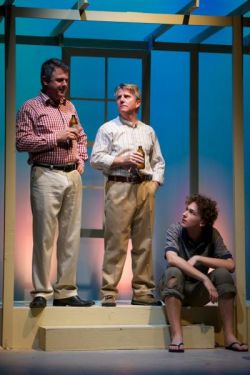 All sisters relate well with Hilary’s son, Troy, played by fifteen-year-old Oliver Beard, who also composed the score for the production. Beard plays the quiet, intelligent teenager well, especially in some poignant scenes with his grandfather (Barry Moray).

Martin Bell plays Meg’s English husband, Edwin, with much appeal. Bell, who is appearing more often lately on community theatre stages, has real ability to get inside the character and find the nuances that bring it to life. With Edwin he makes the most of some clever lines and well-timed humour.

Visitors to the area – retired teacher Marge (Lynn Turnbull Rose) and writer Dick (Rob White) – are the observers, filling the audience in on important details mostly regarding Meg’s latest book and the publicity it is receiving. Turnbull Rose is effectively sympathetic in this role and equally defensive of the family’s  right to the privacy that Dick threatens to invade.

White’s interpretation of Dick as a typical Australian male is perhaps a little loud and heavy at times, but is realistically portrayed and contrasts well with the typical English reserve of Bell’s Edwin.

Though there are some problems with the design and choreography in this production, the play and its messages shine through.