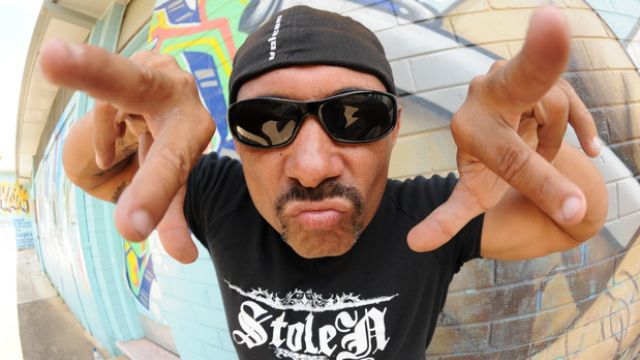 For those who haven’t seen it, Housos is an SBS TV series set in the fictional suburb of Sunnyvale, focusing on its low-income residents who live in housing commission homes. Housos Live on Stage features some of the actors from the series playing their familiar characters. Hosted by Paul Fenech as Franky Falzoni, the show is very much geared towards the series’ dedicated fans, who seemed to be out in force in last night’s audience for the first of several Melbourne Comedy Festival performances. People unfamiliar with the series and the characters would not have got a lot of the references, but there was still plenty of broad-based satirical humour for belly laughs.

There was also audience participation, including a memorable moment when Fenech got a 13 year old fan onstage to coach him in how to pick up girls, lots of actors running around in the audience, and even occasional flinging of pizzas. Despite performing against black drapes with no set, and an occasional over-reliance on video clips played on two screens which were rather small for the size of the room, the show clearly went down very well with the audience. The most popular performers seemed to be the two women, Elle Dawe as the foulmouthed “Shazza” Jones and Vanessa Davis as Vanessa Talawahoo, but Kevin Taumata and Fenech were also equally memorable in their characterisations. For fans of the show, Housos Live on Stage should be a treat.