How to Rule the World 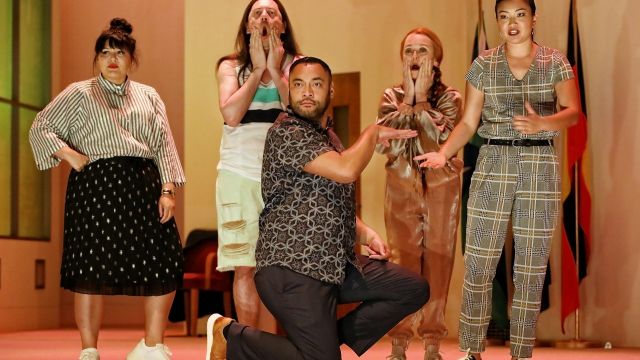 Nakkiah Lui’s madcap satire begins with the promising premise of three well-educated, ambitious if marginalised Australians – an Aboriginal, Korean and a gay Tongan – trying to snatch power in the Senate by getting elected their own carefully selected bland white male.

Direct to audience, they share their need for a puppet pollie to defeat a draconian Sovereign Territory Bill, driven by a desperate Prime Minister threatened with another leadership spill.  But their puppet turns into a power-hungry monster, their own methods begin defying their principles and, worse, they start scheming against each other in a hopeless war of minorities.

Lui’s comic capacity to spin 360 degrees in presenting competing rhetoric and home truths about our race myths, multicultural self-congratulations and the real paths to power makes this stimulating hilarious theatre.

But How to Rule the World is over-written, often on the cliff edge of corny student revues and, playing for laughs, abandons any empathy we might feel for these three.  Lui’s own short speech about the inherited trauma coming from identifying within Aboriginal culture is a moving exception. Her play is sustained by impressive production surprises from Paige Rattray (better here  directing than script editing!) and a flexible use of Marg Horwell’s chilly recreation of a corridor in Federal Parliament.  As our three heroes recount their voyage, it leaps between all sorts of places and remembered scenes.

Michelle Lim Davidson, Anthony Taufa and the charismatic Lui herself are all strong. Rhys Muldoon is perfect as the matey testosterone-fuelled PM and as the created pollie, the unemployed actor transformed by suit, haircut and meaningless lines, Hamish Michael excels.

And Gareth Davies and Vanessa Downing bring truth and great comic flair to a variety of roles.

Paul Mac and Steve Francis’ urgent score/sound helps drive the pace and somehow we happily last two hours of big laughter, silliness and provocative thought. It’s a welcome third play by Lui to be staged by the STC.