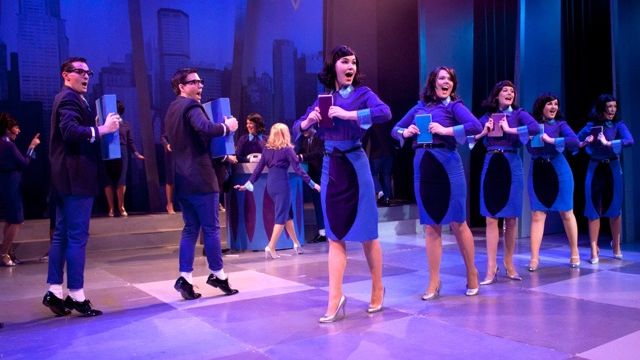 When How to Succeed in Business Without Really Trying opened on Broadway in 1961, it won a Tony Award for its starRobert Morse as well as 6 others. With a score by Frank Loesser, and a book by Abe Burrows, Jack Weinstock and Willie Gilbert, (the best known satirists of their time) this tribute to the post-war 1950s (based on the 1952 book by Shepherd Mead) about a window-cleaner – J Pierrepont Finch - who rises from window cleaner to head of the company with few skills but lots of ingenuity –  is like TV’s Mad Men with singing. The score is witty, and the show thumbs its nose at corporate America…but a closer look shows that is dated and needs to be handled with care. 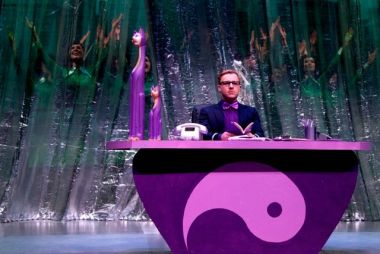 Cut to Ringwood, 2012, and Mountain Districts Musical Society’s lavish and ambitious version of HTSIBWRT! There are as many weaknesses as strengths in this production, but when you have a lead actor with the quality of Tyler Hess, you’re prepared to overlook any shortcomings. Hess names original star Robert Morse, and revival star Matthew Broderick as his idols, but he has more charisma and stronger vocal ability than either of them. He gives us a Pontie who is more Mickey Rooney than anyone….Rooney from the forties when he and Judy Garland exhausted us with their boundless energy and enthusiasm. Hess dominates the stage with electrifying energy, cheekiness, adorable boyishness, and great singing. Best of all, he’s one of the few in the cast that understands the period and the satire of the time.

Peter Smitheram gives us a a nicely layered JB Biggley, and Chris Handley (Bud Frump) presented a larger than life Frump, with very strong vocals and comic skills. Lucia Craven made a banquet out of Hedy La Rue, and I almost forgot Nancy Hayes in the same role. Will Deumer (Twimble/Womper) has two of the show’s best songs, “I Do It The Company Way” and “Brotherhood of Man” and shows us that a legacy of 40 years in professional theatre does make a difference.

The rest of the cast tries hard but is often found wanting. They clearly don’t understand the satire, or the comic timing of the period, and so most gags go without laughs because the lines are wrongly timed. Director Richard Perdriau must take responsibility for that. On the other hand he gets praise and admiration from me for the lovely touch of having the “How to Succeed” book in a different colour whenever Finch pulls it out; co-ordinating with the set and costumes: Inspirational. Choreography was good but seemed under-rehearsed. In fact the whole show seemed somewhat flat on the second night, perhaps a reaction to opening night’s traditional adrenaline rush. 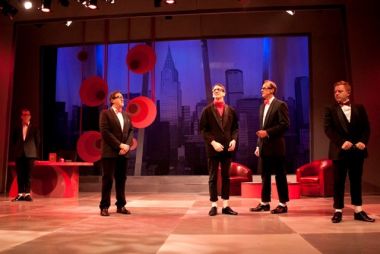 Director and Star also designed the set and costumes respectively and the colour palette is terrific throughout. It really looks both fantastic and expensive. Danny Isko’s lighting design is as striking as the sets and costumes, but sound designer Phillip Van Nes would be justified in doing serious harm to whomever was controlling sound on Saturday night. It was nothing short of sabotage. Singers mikes were off when they should have been on; and sometimes came on halfway through singing a line; sound levels were inconsistent and sometimes the chorus was without sound for whole choruses, despite everyone having expensive radio mikes. The band is good, but the transitions and pick-ups are sometimes slow, resulting often in 5 second stage waits until the intro starts. Set changes too sometimes take too long. However, when an hour and 20 minute first act stretches to an hour 40 minutes, you know that something is wrong with the pacing and the energy.

Despite the problems, this production is well worth seeing. Tyler Hess alone is worth the ticket price, the show is beautifully presented, and the line between commercial theatre and community theatre is being all but obliterated by stylish productions like this.

Click here to check out the May / June electronic edition of Stage Whispers for free. 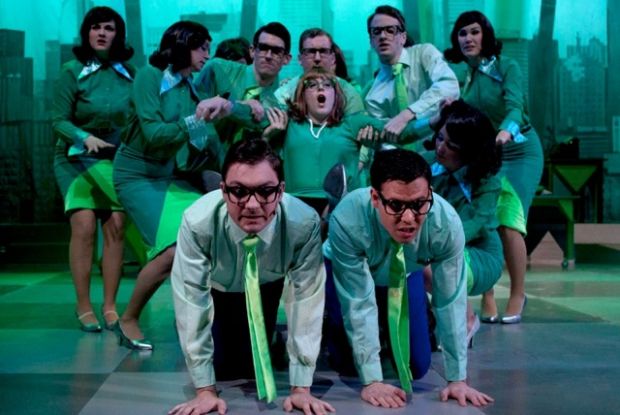