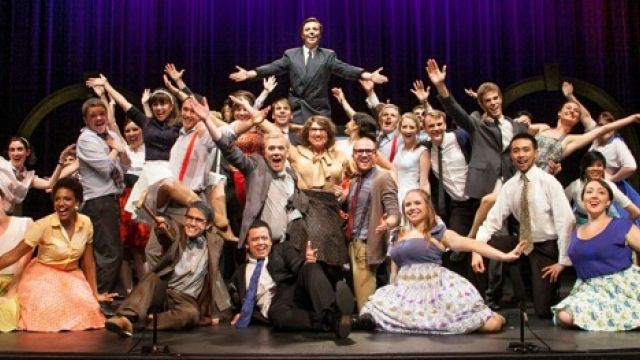 Warm nostalgic memories of my own student productions flooded back watching the MUSE production of this Broadway classic. Nearly 40 years ago, as a drama under-grad, I had my first chances to direct and play principal roles (well above my own age) in a similar student club. Always achieved on minimum budget and maximum enthusiasm, those shows were great grounding for the high school musicals I later staged as a young teacher. That student society was a cross-faculty melting pot, including students across the spectrum from medicine, law, architecture, engineering and more, alongside arts students like myself.

How to Succeed at Sydney University is blessed in abundance with the same kind of enthusiasm and energy I recall, the great asset in a production where the sets and props are simple and very minimal (and we’re talking budgetary rather than deliberate design minimalism here, I’m thinking), and the emphasis is thrown right onto the performers. Male costuming was fairly simple – mostly a case of find your own suit, I’m suspecting - especially as I was told that female cast members personally made (and paid for) the gorgeous, colourful, full-skirted outfits which made their scenes, and the big, high-energy ensemble numbers, so swishingly vivid and attractive.

If Gavin Brown’s performance as the ambitious young leading man J Pierpont Finch wasn’t as mercurial and charismatic as some I’ve seen, he provided a constant, steady anchor for the show in the pivotal role. Aiden Kane was arch and lively as his comic nemesis, the Boss’s nephew Bud Frump, nailing many moments with excellent timing.

For mine though, the evening was really driven by some stunning performances and accomplished stagecraft from the ‘women-behind-the-men’. Vivacious Anna Colless brought a delightful, disciplined energy and charisma to the stage with each appearance as Rosemary, along with probably the best musical theatre voice of the night. Attractive Natasha Stanton’s Miss Jones was never going to be the older secretary that script implies; instead, she imbued the role with a level of poise, authority and presence, which made her performance another highlight. Hedy la Rue may be an archetypal boss’s bimbo on the surface, but Sophie Edmonds’ wickedly engaging performance ensured her comical sex-bomb was nobody’s fool. Gabi Kelland was a sympathetic Smitty, Rosemary’s friend, though she was let down by the sound on some of her vocals.

Characterising substantially older roles is quite a challenge for such a young company. Jordy Shea played J B Biggley way larger than life, using lots of outrageous physicality and pantomime. A similar performance style came through elsewhere to a lesser degree, suggesting a broader style choice couldn’t quite be sustained. Gavin Brown and Aiden Kane seemed to rise to and thrive working off and reacting to Shea’s physicality, creating some nice broadly comic shared moments. Isaac Carroll also impressed as a consistently business-like straight man.

Yes, maybe it’s a little raw, with some shaky stagecraft, technicals and rough edges along the way, but the joy, energy and enthusiasm with which the musical was delivered, particularly in the ensembles, combined with some stand-out principal performances, ensure an enjoyable student production.