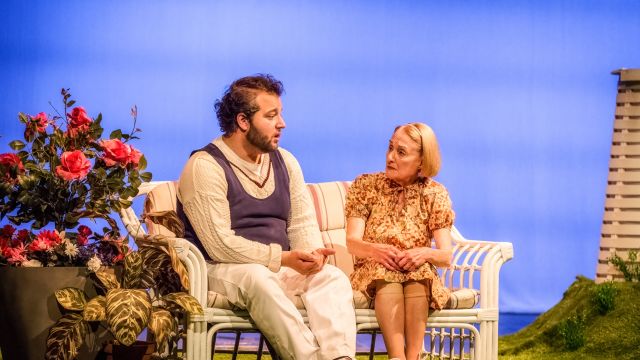 When the socially awkward Felix returns home for his father’s funeral, his mother’s behaviour and ongoing scorn regresses him to his childhood. Another man, who is nothing like his father, is spending too much time with his supposedly bereaved mother – and that man’s daughter once had a relationship with Felix before he ran off to study Superstring theory at Cambridge.

That Ayckbourn-esque synopsis is the foundation for an occasionally funny yet often confusing play by the English playwright Charlotte Jones. It has allusions to Shakespeare’s Hamlet, with a soft focus on as yet unresolved family tensions.

Nick Endenburg plays Felix well, with the right balance of confusion and naivety of someone who can only articulate through science, struggling with a grief he neither recognises nor expects. His ill-fitting clothes are a superb part of his narrative, of a man who can’t quite work out his place. As the mother, Celine O’Leary’s Flora should be dripping with sarcasm as the self-proclaimed ‘queen bee’, yet she’s more believable as a vulnerable woman protecting herself with hurtful barbs. Christopher Leech as the new lover, George, has a wonderful time being drunk most of the time, brashly delivering his bitter dialogue amidst the physical comedy that is the comfy garden chair of English farce. Much more restrained is the excellent Brian Knott, the gardener, calm and deliberate with his wisdom offered to Felix on the grass.

The appearance of Rosie (Phoebe Wilson) brings a very welcome lift to the stage, rising above the negativity and seriousness, pulling up Felix with her when she tries to seduce her ex-lover; there is believable chemistry between Wilson and Endenburg.

The ‘hold-your-breath’ moment comes from the otherwise comic foil of Mercy, played quietly by Rhonda Grill until she is called upon to say grace. Her words on the emotional states of those around the table is a remarkable, passionate performance, bringing together bits and pieces that have been buzzing around but not quite landing, like the bees James used to keep. The lush English garden set is bold: an apple tree frames the rose bushes, a garden seat, a bright green lawn – and a massive beehive. Richard Parkhill’s lighting is excellent, as always, propping up the progression of the story and adding atmosphere, as does the Cotswold wildlife in Ray Trowbridge’s subtle sound design.

The director, Kerrin White, clearly has affection for the English Cotswold ideals, and has tried to recreate the thunder and lightning of an English summer afternoon, the gentility of soup served in bone china shattered by released tensions, but it does take a long time to get there. There is a galaxy of analogy here: besides Hamlet, there is the societal structure and lifecycle of bees, the conflict of competing cosmological theories, and White takes on the challenge to weave these strands together into a domestic drama with a scattering of comedy.