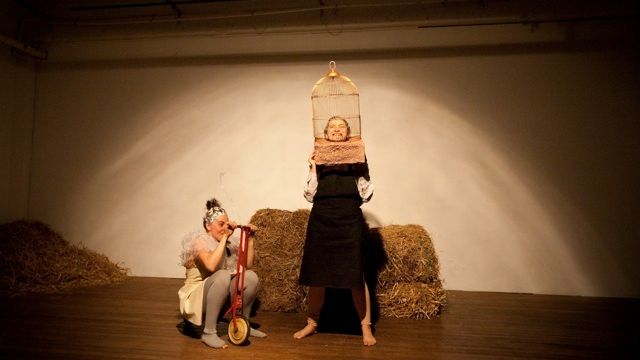 In their third show of 2012 Clockfire Theatre presents the dilemma of the creative artist confronted by distraction. Volumes of distraction are ever present around us and can be fatal to the development of new creative work. This brief performance of a highly creative new work-in-progress puts the audience in the artist’s seat then assaults us with a cacophony of ‘musical’ noises from the ‘maestro’, generated by whacking various tins and cans and even running a saw over the rim of a metal drum, plus a veritable tsunami of verbal instructions and mild abuse from the two clowns. It would be really hard to concentrate if we were trying to write this play whilst we were watching it.

We feel like we’re losing our heads. Then she does! One of the two actors assailing us (us being the audience as artist), has her head locked in a cage. Her brain is trapped. Then her head is detached, so we join her in an out-of-body experience when her head now sits upon a pile of hay. This scene is reminiscent of Winnie buried in the mound of sand in Beckett’s Happy Days. In fact, even though this work is loosely based upon a Kafka short story, it in fact has heavy overtones of Samuel Beckett. A confusion of words tumble forth from the two clown-like figures confronting us. They are the sirens of sloth, who challenge us, tempt us, attempt to feed us, confuse us, and then abandon us for a headless abandon of their own.

The ideas Beckett works with needed revisiting and all we’ve really seen of Beckett lately is Waiting for Godot. He did so much more than that. So having Clockfire explore Beckett’s creative delta is a wonderful experience. A standout was Alicia Gonzalez as the hitty hitty bang bang Maestro, who is a joy to see and hear. Highly recommend.