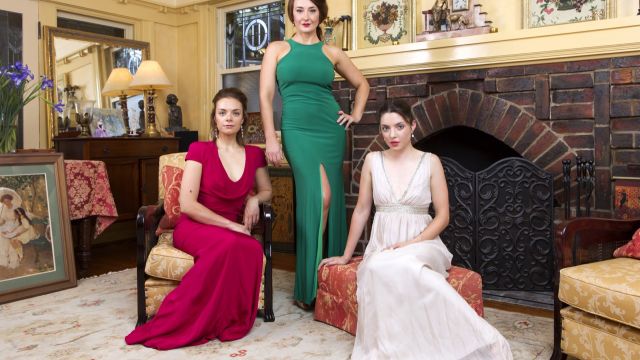 ‘When the hurly-burly’s done,’ chant the Witches in Macbeth, ‘when the battle’s lost and won…’  Playwright David Rabe’s ‘hurly-burly’ is not that of war but one of life lived at accelerated speed, blurred perception and unacknowledged desperation, fuelled by drugs, cynicism and ‘Hollywood’ culture, all creating a kind of alienating fog from which the protagonist, Eddie (Anthony Scundi) struggles to escape.  Set in Los Angeles (or more specifically ‘Hollywood’), it is not ‘about’ the movie business (as is, say Mamet’s Speed the Plough) but the movie business is a reliable metaphor for falsity, illusions (shattered and otherwise) and the heartbreak of ‘the American dream’ that anybody can be a somebody.

Eddie and his business partner Mickey (Will Atkinson) are LA casting agents with no illusions about their business and the ‘industry’ in which they work.  They know the television shows for which they ‘put up’ casting suggestions are junk and that some ‘authentic’ actors are cast only to give a veneer of reality to a product that is otherwise phony.  Eddie is bitter about this demeaning phenomenon, but Micky, a ‘realist’, is comfortably blasé.  Yeah, so what?  It’s a living.  They have a sort of a client, for some reason a friend, a roughneck wanna-be actor, Phil (William Prescott).  He’s a confused and violent guy with a hair-trigger temper and zero self-knowledge.  Arnie (Kostas Ilias) is a would-be producer forever on the brink of a deal.  But it is the women who pass through these men’s lives that illuminate their darkest places.  There’s Donna (Amelia Bishop), a hitchhiking teen waif who’s prepared to – or expects too - ‘put out’ for a place to sleep or a meal.  Arnie found her in an elevator.  He doesn’t want her, so he brings her over to Eddie and Micky’s – a Care package, as he puts it.  Darlene (Erin Lilja) offers love; she could be Eddie’s salvation – if Eddie can get past his obsessive suspicions.  And there’s Bonnie (Nicole Melloy), the cheerful ‘exotic dancer’ and part-time hooker, employed by Eddie as a sort of way to cheer up Phil whose marriage is a train-wreck. These women, for all their flaws, are more genuine, more grounded than the confused but ever-rationalising men – and this is enhanced by the performances director Gabriella Rose-Carter gets from her cast.  Her direction is ever alert to the sub-text as well as the body language of the characters.  Waif Donna’s love for her Willy Nelson album (her only possession), with its plaintive ‘old’ songs, is pathetic but touching.  Ms Bishop, in keeping with the rest of the cast and the text itself, maintains our sympathy by letting us see the humanity under the sad and disconnected surface.  Ms Lilja reveals Darlene’s troubled past with a nice balance of pretend matter-of-fact and a plea for understanding.  Not that either does Darlene any good.  Ms Melloy’s boisterous vitality invests her Bonnie with a hugely likeable persona – despite all we hear about her before her entrance - so that the shock that follows pulls us into her pain and her rock-bottom realism.

Kostas Ilias almost appears not to be ‘acting’ at all, but he just might be a touch too laid back as deluded Arnie, the guy who ‘gives’ Donna to the boys.  Will Atkinson’s Mickey is nicely, chillingly au dehors le combat; smiling, never raising his voice, his heartless logic eventually leading to impatience with hapless Eddie.  When Eddie asks what about their friendship, Mickey snaps back, ‘Adequate.’  William Prescott has, with his Phil, a tough acting challenge: to play someone stupid – or at best, unconsciously morally obtuse – and Mr Prescott does this very well indeed, creating an atmosphere of potential violence even when his worst excesses occur off-stage.  Anthony Scundi is the ensemble’s lynchpin as Eddie: the only man who can see through the fog to something better, something real, who writhes at the loss of meaning and identity, but is bent on self-destruction.  Mr Scundi's role is tough.  He must swing between violence and sympathy, between shouting and whispering, between insight and inarticulacy.  With his film star good looks, Mr Scundi takes his Eddie to the very brink of realisation or even escape… only to trap himself once more. Annalisa Lucca’s transverse, all-white set is cunningly designed to allow for the characters’ restless, frenetic (at times a little too frenetic?) movements.  Time and mood are established by John Collopy’s lighting.  Whether Justin Gardam’s music quite works to support the drama is debateable.  Let’s say I was aware of it, but not in the right way.

This 1980s play (scarcely dated, if at all), has two most salient features.  First, the amazing ability of these Americans to be so very articulate and yet miss (or evade) the point – to run off at the mouth and yet end up exactly where they started.  Mr Rabe’s dialogue is rapid fire attack and counter-attack, convoluted reasoning, elaborate sentence structure and erudite vocabulary mixed with obscenity and driven by suspicion and aggression.  Second, is the male characters’ automatic, casual misogyny in the way women are defined or described, sometimes right in front of them.  Women - ‘bitches’ - are objectified – and the reverse, sentimentalised – feared and suspected.  You may think things have changed, but for me there is nothing unfamiliar about these men and their attitudes.  Q44 seems to choose plays of substance, that provide more than opportunities for marvellous acting.  This is one of them.  It is tough, it is uncompromising, but it is illuminating in its starkness.

P.S.  So here is yet another powerful production from the Q44 company, their theatre tucked away (but easily accessible) amidst artists’ studios and galleries on Swan Street, Richmond.  It’s a truly co-operative outfit: the actors built the set and supplied their own wardrobe; Ms Melloy and Mr Prescott assist Tania Knight with publicity; Mr Ilias does fundraising; and Mr Scundi is the general manager.  More audiences should know it’s there.