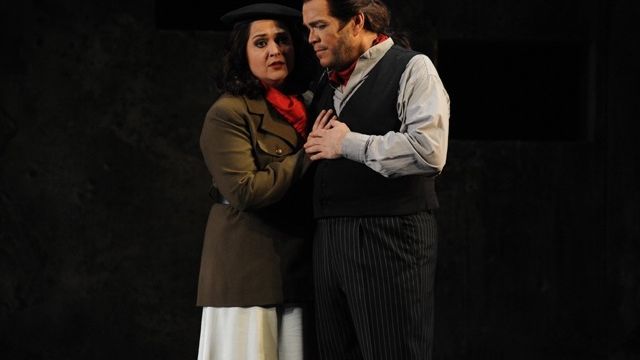 Verdi’s opposition to oppression is certainly evident in Il trovatore, and the setting of the Spanish Civil War in the 1930s makes it even more poignant because the oppression is historically closer. The persecution of artists (the troubadour, Manrico), gyspsies (Azucena and her mother before her) prevailed into the twentieth century, as did the conflict between rich and the poor.

With this as its background, and its tortured plot of unrequited love, socially impossible love, suicide and execution, the opera, despite the beauty of its music and the range and strength it demands of its performers, is one of darkness and despair.

This is accentuated in this production by the gloomy set and shadowy lighting. Towering, dense castle walls loom above the misty stage, relieved by shafts of light from turrets high above or escaping from Leonora’s window. The lighting heightens the sense of desperation, and is especially effective at the end of Act One, when strong spots high in the auditorium pinpoint performers as they sing.

By contrast, the prison scene is set high above the stage, behind part of the castle wall that subsides to reveal stark cream walls under bright yellow light. Here, no one can escape their fate, as the sad denouement of the plot reveals. Strange to think then that for a time this opera was regarded as a comedy and was even the background for the Marx Brothers movie, A Night at the Opera.

Back to the music, because despite the underlying didacticism of Verdi’s work, it is an opera, and the music, widely known and loved, is the essence of the production. Conductor Arvo Volmer brings out the stirring beauty of the music and the tympanic, brooding background of conflict and impending war.

As the opera opens, Ferrando, cleric and advisor the Count di Luna, Richard Anderson begins softly, then more resonantly, to rouse the sleeping soldiers and tell them (and the audience) the story of the disappearance of the Count’s baby brother many years ago, and the threat of an unknown Troubadour who has been serenading Leonora, beloved of the Count.

Baritone, Michael Honeyman, as Count di Luna, takes up the story, and his passion, anger and despair echo in rich, ringing notes.

Leonora’s arias are demanding and just as passionate and Daria Masiero makes their “rising and falling phrases stepped through semi-tones” (Christopher Lawrence’s words – who am I to better them!) vibrantly dramatic.

Arnold Rawls’ rich tenor is a perfect vehicle for Manrico’s troubadour. His controlled high notes soar above the castle walls into the sails above and delight the audience again and again. But it is Milijana Nikolic whose acting and voice steal much of the show. She portrays a weary, disillusioned Azucena with amazing belief and power. In her character, and her voice, Verdi’s sympathy for the ageing gypsy, carrying her burden of guilt for years, shines clearly.

Supported by a very strong chorus of soldiers, gypsy rebels and their ladies, and sweet-voiced nuns, they sing their sad tale as the castle walls loom above them.

It is not a tale that lends itself to much humour, but directors are apt to give the audience some comic relief, and this is found in Leonora’s sister’s reactions to her lovelorn aria in Act One, and the cheeky direction of the new enlistments donning their uniforms in Act Two.

Though this raised a surprised laugh, it did nothing to dispel the hopelessness of Verdi’s message or the beauty of the music in which it is told.