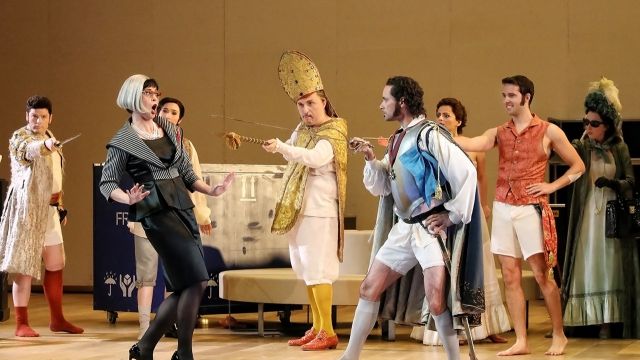 Composed by Rossini in 1825 to celebrate the coronation of King Charles X of France, Il Viaggio a Reims (The Journey to Reims), contains some of Rossini’s most impressive music. Though the plot is simple, the music is difficult and challenging for the orchestra and the cast of ten soloists and eight smaller roles. Yet after four performances, Rossini pulled the score apart and the manuscript was lost until various pieces of it were reconstructed by American musicologists Philip Gossett and Janet Johnson in 1983.

Since the first revival performance in 1984, Il Viaggio a Reims has been produced by opera companies around the world despite the challenges it presents.

This production, in association with the Dutch National Opera, Amsterdam and the Royal Danish Opera, Copenhagen, meets those challenges with a creative aplomb that combines the arts in a most unexpected and delightful way.

Taking the story of a party of VIPs who, stranded on their way to Reims when their luggage is lost, celebrate the coronation on their own, director Damiano Michieletto moves the setting to an art gallery of masterpieces from the history of art. In doing so he brings the arts together in a quirkily humorous production that has at its base the idea of marrying the opera with Francois Gerard’s massive 10 by 5 metre painting of the coronation of Charles X. Michieletto then extended the theme to include representations of some modern masterpieces by artists such as Picasso, Magritte, Van Gogh, Goya, Kahlo, Haring and Fernando Botero, whose subjects come to life. Lost in the museum, they search stiffly for their paintings, while the music soars around them, sung by the nineteenth century aristocrats from the Gerard painting, who are bemused by these strange characters from the future – and the contemporary visitors to the gallery.

There are many similar instances where Michieletto’s creative imagination matches Rossini’s extravagant score, none more so than the enormous frame that fills the stage to encompass a physical and artistic representation of the Gerard painting. To say more about how this is achieved would spoil the incredible finale of the production. Suffice to say, it is breathtaking.

Italian designer Carla Teti’s costumes mirror the artworks, yet pick up on Michieletto’s quirky ideas. They are works of art in themselves, especially the detail in the costumes of the courtiers in the Gerard painting. The rich fabric and colour in the final scene contrasts beautifully with the stark walls of the art gallery in the earlier acts, and the more contemporary colours of the later artworks. In the orchestra pit, the OA orchestra, led for the first time by the energetic baton of charismatic conductor Daniel Smith, revels in the difficult but exultant score.

It’s not often that an opera is as delightfully quirky as this. It’s different. It is a tribute to Rossini himself, the wonderful imaginations of Damiano Michieletto and Carla Teti, realised by revival director Constantine Costi, lighting designer Alessandro Carletti, and the construction crew who realised Paolo Fantin’s enormous set on the new, modernistic Joan Sutherland stage.