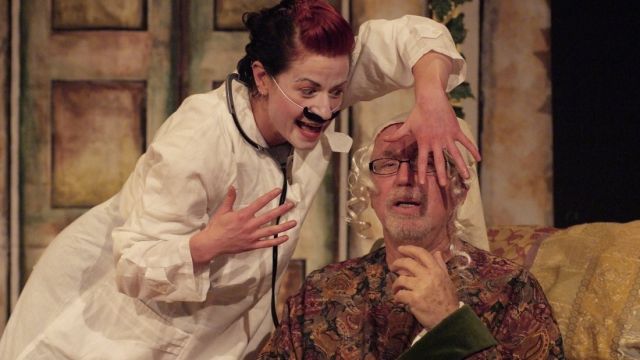 From highly refined, intelligent wit and word play, almost acrobatic acting and slapstic, to gross-out bodily functions—there’s the feel of a circus to this magnificent production. Last year, Centrepiece Theatre’s The Imaginary Invalid played to rave reviews and helped net Jim Adamik a Canberra Critic’s Circle award. This reprise, with updated set, costumes and look, is a chance to see great satire done brilliantly. It’s a brash, loud, bawdy, vibrant, confident production. From the moment the actors stride out onto the stage the audience is transfixed by their energy right down to the splash of bright red on the top of one actress’s hair. Everything is taken to the extreme, so that what the audience sees on stage is a fast-moving chaotic storm of colour. All except for Argan, the hypochondriac of the title.

Tony Turner brings Argan an injured naturalistic dignity as he is manipulated, cheated and swindled—and poked, prodded, purged and given large enemas and large bills by doctors. Argan’s second wife, played by Jordan Best with superb comic timing, pretends to be the model of love and attention, while secretly coveting his money and bedding a sleazy young lawyer. His daughter Angelique has the temerity to have found her own love match, while his maid Toinette and brother Berald hatch a plan to manipulate sense into him.

Just like a modern hospital patient, Argan accepts with a quiet martyrdom the horrors that are prescribed him and the quite revolting effects they have. Ridiculous as his predicament is, Turner makes Argan someone for whom the audience has empathy, and this is what makes it work so well. The other participants are overplayed hilariously in various flavours from appealing to appalling. Director Jordan Best has a magnificent comedic sensibility, as she demonstrated with last year’s Love Story. While Turner plays Argan as a perpetually bewildered, credulous straight man, the rest of the cast goes to town with physical comedy and pantomime. The pace doesn’t slacken for a minute. Erin Pugh as Toinette and Kiki Skountzos as Angelique interplay beautifully on stage together exaggerating expressions and movements. Erin Pugh is an absolute joy to watch, being both a clown and as lithe as an acrobat as she grimaces, gesticulates and mimics people. Young Riley Bell, as the love interest of Angelique, doesn’t move as fast but draws laughs by booming his lines out with overacted earnestness. Jim Adamik in his significant bit parts as various doctors--well, he's just plain funny in whatever he does and he's at his best here.

If you avoided seeing this last year because you thought Moliere was old and dusty, get along and educate yourself while you have the chance. Highly recommended.

Image: Erin Pugh clowns it up with Tony Turner in The Imaginary Invalid. Photo by Steve McGrory.