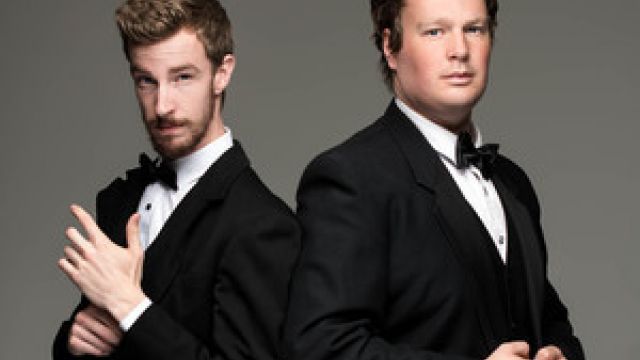 One is immediately transported to Victorian times when greeted by Mr Stunz and Mr Wonders in the ornate ballroom of Ayers House. There is a vaudevillian feel to the show as these two performers, fitted out aptly in Victorian era suits and beautiful waist coats, hurry us to our seats announcing that there ‘has been and incident’. Some attendees are given small buff coloured envelopes and told not to open these until asked. This sets up an air of mystery and just a twinge of excitement at what is to come.

Auslusion are a unique Victorian era magic duo, who not only throughout the course of their show- Improbable Deductions, demonstrate very clever powers of deduction and ‘mind reading’ but show that they have considerable skill in magic and in showmanship.

They are seasoned performers, on radio and television; having most recently been contestants on Australia’s Got Talent in 2019. A popular act all over Australia, their current show at Ayers House for Adelaide Fringe is a little charmer.

Like a traditional vaudeville act with a pantomime feel, we are guided through a murder that has occurred and using deduction these two clever gents treat us to a delightful unravelling of clues, and one by one, eliminate the envelope- holding audience members as the suspect. Finally, one poor audience member is accused as guilty and we see the ‘death certificate’ from the murder. How they solved this remains a mystery, as alibis, times and locations were created by audience members spontaneously. Such fun!

Without giving away the content, the second part of the show involves magical mind-reading and a Harry Houdini style escape. This in itself was quite amazing as the skill required to do this trick is significant.

All in all, this is a very entertaining show and is quite interactive, so it keeps one’s attention and curiosity peaked. It was delightful to be carried to a gentler time of showmanship, simple entertainment and charm. The only disappointment was that it only lasted for 45 minutes!