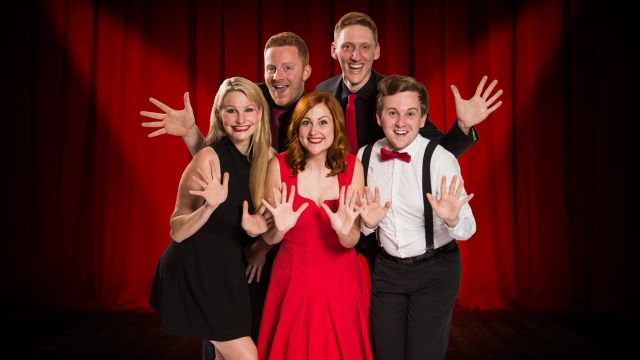 There’s an art to improvised theatre, not least of which is the art of listening to your fellow actors to create characters that are interesting and a plot that carries consistent threads through the show to a successful conclusion. Impromptunes, as the name suggests adds a whole other dimension by adding all of the elements of musical theatre.

Impromptunes has them all: overture, entr’acte, solos, duets, ensemble pieces and some pretty snazzy dance numbers. The cast use no set, apart from a couple of chairs, no fancy costumes (although a misbehaving set of trouser braces are worth a mention) and no props, apart from the imaginary of course.

Morgan Phillips is our MC for the evening and after some patter to ‘warm up’ the audience he asks for a ‘title’ for the show. At least half of the audience have been to musical improv before and have come with their title ideas at the ready, which they share with great gusto. Even Morgan seems a little overwhelmed by the response but settles on the title ‘We Can Be Heroes’.

Perhaps it’s my age, but the title of our show immediately takes me to the David Bowie song. It took the cast of Impromptunes  (Josh Burton, Teresa Ewan, Brenton Gardiner, Brenna Glazebrook, Morgan Phillips and their super talented Musical Director, David Peake) somewhere else altogether. We find ourselves in Comic Land where all of the superheroes have died. Their deaths have brought about world peace and, even more amazingly, all the politicians have stopped lying.

A quirky plot ensues following the rise of a new superhero, local journalist, “Letter Boy”, or simply “L Boy”. Using words as his weapons, even if his spelling is a bit creative, “L Boy” teams up with his trusty friend, but not quite sidekick, “IT Guy”. Together they take on cops turned crims “Pistol” and “Whip” and Gregory Packenham, villain turned confused Robin Hood wannabe (who for some reason has a robot wife).  Of course, it’s all feelgood in the end as they remind us in the grand finale, “If you do a thing, you can be a hero (or villain)”.

The show you see is likely to be unlike anything I’ve described here. Every show’s plot is developed on the spot and the cast changes regularly too. What won’t change is the skill, the fun, and the hilarity that Impromptunes delivers time and again.

Here’s a Fringe show you can see every night of the festival, you won’t be disappointed, and you’ll never see the same show twice.